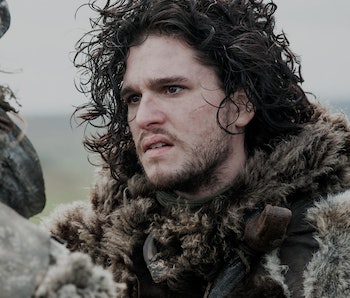 Since Jon Snow bled out at the end of Game of Thrones Season 5, you might have been busy. If you’ve spent the ensuing months re-watching all his scenes, frantically theorizing, or perfecting your own Snow pout, your obsession has nothing on Simon Beck’s.

Snow Artist Beck paid tribute to our favorite fallen bastard and braved his own North-like weather, carving a giant dire wolf in the snow. Below, he explains his meticulous planning process, and looking like he should guest star as a member of the Night’s Watch. He’s tough enough to weather the snow, he’s got a beard — and just listen to that authority. Midway through the video, he also howls like a wolf, displaying his own Warging prowess. Because, why not?

More like this
Science
18 hours ago
ESA's New Juice Mission Might Finally Uncover Jupiter's Hidden Secrets
By Doris Elín Urrutia
Science
9 hours ago
Look! Eerie Green Comet Poses With Big Dipper and Little Dipper
By Kiona Smith
Science
Feb. 6, 2023
How the Webb Telescope is Rewriting What We Know About the Early Universe, One Galaxy at a Time
By Doris Elín Urrutia
LEARN SOMETHING NEW EVERY DAY.
Share: