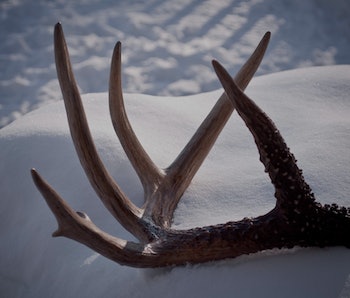 Deer populations have reached pest-level in many wooded pockets of the United States, leading to much hand-wringing over human and ecological consequences of the ungulate invasion. But here’s a puzzler: With all of those deer munching on gardens and crops, what happens to all of the antlers they supposedly shed every year around this time?

In parts of New York State and Pennsylvania the deer population has reached an estimated 30 to 35 animals per square mile. Assuming half of those are male, and each of those bucks has two antlers, that’s 30-15 antlers shed across a square mile of forest every single year. And yet, even dedicated shed-hunters have a hard time bagging a nice rack. There must be a reason.

The most obvious one is that humans are not the only ones looking. Antlers are a tasty and nutritious treat for rodents and other mammals, including foxes and bears, which are better at sniffing them out than any human hunter or would-be interior decorator. Antlers are a great source of calcium and they’re fun to gnaw on (if you’ve got a large sharp set of front teeth). It’s rare to find an unmolested antler even a few days after it drops. A few months after shedding season the forest floor will be all but cleared of any evidence of shedding season. Any remains will eventually be decomposed back to the forest with the help of bacteria. Circle of life, etc.

The more complicated reason antlers are hard to come by is that humans don’t generally look in the right places. To know where antlers are likely to be, you have to first know where deer like to hang out. And then, you have to really pay attention and train your eye to look not just for whole antlers but for little pieces that might be sticking out. There are legendary antler hunters in some parts of the country. These men are essentially poorly armed trackers, the shell collectors of a coniferous world.

If you’re really keen on finding yourself a nice antler set as a souvenir or for a bit of extra income (a quality shed can go for hundreds of dollars), than you’d better do your research. Find out from local hunters what time of year is peak-shedding and where the deer like to congregate. If you’re lucky enough to have snow on the ground, look for tracks and follow them to places where it looks like deer have been milling about, not just passing through. Bring your dog, if you have one, and you’ll have a leg-up on your rodent competition. And keep your eyes peeled — if you’re not quick someone, or something, will definitely get to your prize rack before you do.