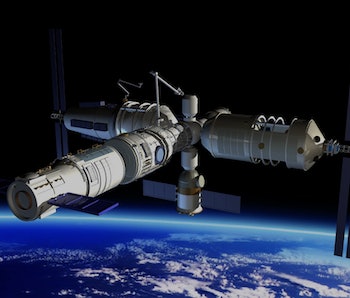 A little less than five years ago, China launched its first space station into Earth’s orbit. Dubbed Tiangong-1 — which means “Heavenly Palace 1” — the spacecraft is now getting a sibling. Last week, China announced plans to launch Tiangong-2 into space later this year and it will see its first human visitors soon after.

If the Tiangong-2 launch is successful, China will speed up plans to send the three-member crew of the Shenzhou 11 mission to the space lab for 30 days sometime in the latter fourth of 2016.

Although the Tiangong-2 has enough provisions for three people, only two Chinese live and work there. The Chinese look to be preparing for possible extensions of the mission, in which case they would want to make sure resources are rationed enough to allow all three Shenzhou 11 astronauts to survive comfortably. That extension could be for any number of reasons —inclement weather, finishing leftover operations, etc. — but it’s certainly wise not to test the limits of the space laboratory during a first visit.

Both Tiangong-1 and 2 are part of China’s bigger effort to build its own functional space station in service by 2022. The country is not a partner with the International Space Station, nor has it expressed any desire to be one. The country’s efforts to ramp up space exploration have been incredibly rapid in the last few decades — although the extent to which their efforts have shown real substantive achievements is up for debate.

In any case, 2016 could prove to be a very successful or very downtrodden year for China’s space ambitions.

More like this
Science
19 hours ago
70 years ago, the world united for a monumental scientific project — and kicked off the Space Race
By Doris Elín Urrutia
Mind and Body
5.9.2022 12:31 PM
These exercise hacks help improve heart health in people with desk jobs
By Nick Keppler
Science
5.10.2022 8:00 PM
4 of the worst heat waves in the last 60 years went unrecorded — here's why
By Elana Spivack
Related Tags
Share: