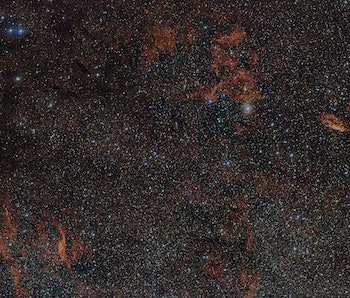 Sitting about 12,000 light-years away, the star formation region RCW 106 encompasses a 100,000-solar mass cloud (solar mass means “size of the sun” or two nonillion kilograms) that spreads over 28,000 ly². Huge doesn’t begin to describe it. Astronomers at the European Southern Observatory at the Paranal Observatory in Chile have been studying it for a while, and they’ve just released an incredible new image — captured by the VLT Survey Telescope of the crimson gas clouds illuminated by stars burned behind the shroud. Those young stars have only recently ignited.

RCW 106, located in the southern constellation of Norma (The Carpenter’s Square), is an H II region, meaning it’s ensconced in hydrogen gas that gets ionized by the starlight emitting from the scorching stars close by. This effect creates a mesmerizing glow of hot crimson.

The wide-field image also illustrates a ton of other unrelated objects. While RCW 106 is located in the upper middle part of the photo, you can also see remnants of a science supernova on the right side, and glowing red filaments surrounding a hot star on the left.

Although the crimson gas is amazing to watch, the ESO scientists are more concerned about understanding the origins of the stars shining brightly behind them. Investigating that question will require more study of the region using instruments that measure the light at different wavelengths.

More like this
Science
3 hours ago
These 5 objects could be Webb's full-color first images
By Kiona Smith
Science
6.23.2022 6:15 PM
Look! Hubble image shows a dazzling star cluster near the center of the Milky Way
By Kiona Smith
Science
6.17.2022 2:00 PM
Look! Cosmic dust swirling around these baby stars might become a future planetary system
By Doris Elín Urrutia
Share: