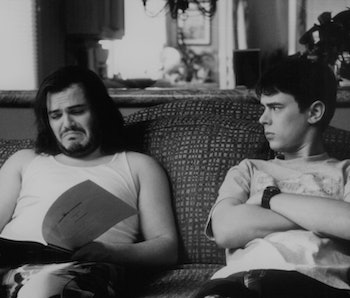 If you’re old enough to have distinct memories of the launch of the CW (née, the WB), you probably also have fond memories of a mostly forgotten little comedy called Orange County, the story of an aspiring writer looking for a way out of his oppressively cushy suburban California home. The film was billed as “Jack Black goofs off with Tom Hanks’ kid,” but it wasn’t exactly indie Van Wilder. Lurking under the surface was a subtly subversive narrative and some weirdly heartfelt performances.

Let’s start with the premise. Shaun Brumder is a high school pothead living in a mini-mansion in Orange County, California, when the death of a friend and a happenstance encounter with a book spurs him to become a writer. In truly naïve fashion, Shaun believes that the only way to become a real writer is to study with the man whose style he wants to emulate. That guy — who is totally not based on Kurt Vonnegut — is a professor at Stanford University, an institution Shaun decides he needs to attend. Though Shaun has the grades and the extracurriculars to get into Stanford, a clerical screw-up puts his future in jeopardy and he’s forced to ask help from the pack of weirdos he calls a family.

Shaun is brought to life by a young Colin Hanks, the undervalued son of the great American institution. Pre-Fargo Hanks the Younger attacks the role of Shaun Brumder with zeal, but it’s not just his show. The supporting cast here is next level. Jack Black’s performance as Shaun’s perpetually fucked-up older brother is both riotously funny and endearingly sweet, but we also get some good stuff from Lily Tomlin, a slightly stranger American institution. Then there’s Catherine O’Hara as Shaun’s perpetually hammered, track-suited mother, who spends most of the movie lamenting the terrible state of her life while wishing for the discomfort of her ex-husband, a wonderfully obtuse and belligerent John Lithgow. Lithgow, meanwhile, is dealing with the repercussions of having married his sociopathic, horny new wife, played by Leslie Mann.

Beyond that, there’s an endless string of cameos from comedy icons like Harold Ramis, Kevin Kline, and Ben Stiller, the latter of whom manages to make his joke-free cameo a study in wry wit.

Even Nat Faxon shows up long enough for someone to make fun of his character’s name (it’s Kip).

Typically, when that kind of talent is arrayed in a high school comedy, the most you can hope for is that the ensemble can elevate a mediocre script into something barely watchable (you know, like in Easy A). Fortunately, the script — which was written by School of Rock scribe Mike White — is a parade of OC character assassinations that feel extremely autobiographical, as though White was venting years of pent up frustration stemming from his own California upbringing (though God knows if that’s actually true; White was born in Pasadena, for the record.

The element of rage coursing through the film’s script prompts some excellent satire, beginning with the most cluelessly chipper English teacher in history, played by White himself.

The entire education system really takes a big hit in the film. There’s Chevy Chase as the principal who craves young flesh, and Lily Tomlin as the world’s worst guidance counselor. Perhaps the educator who comes off best is the late, great Harold Ramis, who spends a lot of his screen time rolling on ecstasy.

The other denizens of Orange County aren’t safe from White’s wrath, either. Sissy Spacek’s kid Schuyler Fisk plays Shaun’s bleeding heart, eco-fanatic girlfriend. Kyle Howard and R.J. Knoll (both of whom you’d recognize) are Shaun’s burnout friends, who also happen to be very bad at concealing their burgeoning love for one another. There are also scads of teenagers proudly saying and doing loads of stupid crap just because their parents are filthy rich. Garry Marshall even shows up for a few minutes to give audiences an idea of the kind of rich buttholes who are unleashing these yuppie larvae on the world.

The razor sharp script and on-pitch performances are deftly handled by director Jake Kasdan. And while the former Freaks and Geeks contributor may have ruined his stored-up good will in the years since (I mean, Sex Tape, guys? Who thought that was a good idea?), it’s important to remember that Kasdan was a real talent until he started working with Cameron Diaz. Orange County serves as a great reminder of that ruined potential.

Kasdan wasn’t going to be another John Hughes, but he could have gotten closer. Like the best high school films, Orange County celebrates youth as a trial and the education system as a gauntlet that must be run. As the story of a young man coming to terms with his origins, Orange County is one of the good ones, like A Portrait of the Artist as a Young Man, but for SoCal stoners. If you haven’t seen it in a while, it’s worth checking out.

More like this
Culture
6.26.2022 11:30 AM
You need to watch the most underrated cult thriller on Netflix before it leaves this week
By Dais Johnston
Entertainment
6.14.2022 11:30 AM
50 years ago, the most underrated Planet of the Apes movie redefined the sci-fi franchise
By Josh Bell
Entertainment
7 hours ago
You need to watch the scariest movie of the 20th century before it leaves Netflix this week
By Eric Francisco
Related Tags
Share: