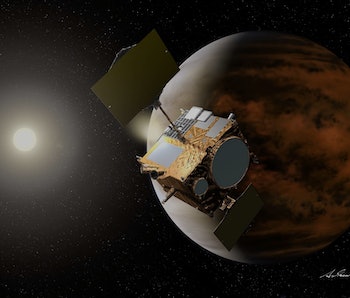 On this day in 1966, the Soviet probe Venera 3 collided with Venus, making history as the first human-made object to make contact with the so-called Morning Star. Incidentally, it was also the first time we’d managed to reach anything other than the moon.

Fast forward to the present: After years of letting Mars hog all the attention, Venus is back in the spotlight. On Monday, just one day shy of Venera 3’s 50th anniversary, NASA announced its plans to launch a Venus rover in 2023 — that’s sooner than we can even hope to reach Mars.

We haven’t landed a probe on Venus since the Soviet Union’s Venera 14 — a probe that withstood the planet’s intense 500-degree-Celsius heat for all of 57 minutes — made landfall in 1981. Before that, several Venera predecessors, together with the NASA-run Mariner 2 mission in 1962, attempted to gather data about the Venusian atmosphere during flybys but had limited success. Which shouldn’t come as a surprise: The planet isn’t exactly lander-friendly — with temperatures hot enough to melt lead, it’s considered the solar system’s hottest — and its carbon dioxide-filled atmosphere is capped with sulfurous clouds. On top of that, the pressure on the planet’s surface is about 90 times that of Earth.

Despite the planet’s violent conditions, the Soviet Union managed to land 14 landers — albeit short-lived ones — on its surface. The United States sent a few of its own — notably, the Pioneer Venus Multiprobe in 1978 — but Venus was largely the Soviet Union’s domain.

The reasons for NASA’s lack of engagement in the Venus space race with the Soviet Union aren’t entirely clear, but the National Air and Space Museum’s space historian Roger Launius has hinted that the two countries had worked out a deal, in which the Soviets would conquer Venus and the Americans would take on Mars.

Since the dawn of the millennium, NASA and the ESA have sent orbiters around Venus, and Japan attempted to do the same in 2010.

We’ve come a long way since crash-landing rovers only to have them sublimate in the searing Venusian heat in a matter of minutes. NASA’s new proposed probe, Zephyr, will attempt to do what humans haven’t done since Vega 2 in 1984 — actually survive on Venus’ surface for an ambitious 50 days and use a landsail made of airfoil to move around its surface.

While NASA’s plans are ambitious, after being acquainted with Venus for over 50 years, it’s about time the space agency took its relationship to the next level.