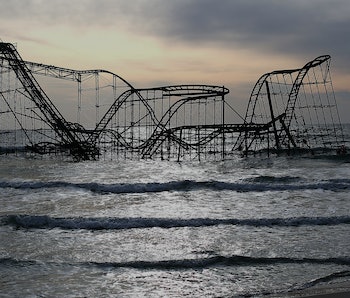 Humans are really bad at calculating probability and risk. Casinos make money because we individually believe that we can beat the slot machine, even though we know that collectively we never have. We fear terrorism, but not driving to work in the morning, even though the latter is a much more significant threat to our well-being. On a biological level, our inability to impartially process probabilities on the fly is likely the fault of our amygdala, which shouts evolutionarily outdated advice from our temporal lobe. On a more basic level, our weakness is about our perception of the way risks mount (or don’t) over time.

Still, there is an entire industry of people who do understand how risk changes over time. It’s called the insurance industry and Americans, to an almost unique degree, fear and loathe it.

Insurance companies tally up all the bad things that could happen, quantify their likelihood and likely costs, and make sure that premiums cover costs with enough left over for a healthy — or ludicrous — profit. In order to accomplish this the insurance industry leverages a sub-industry, catastrophe modeling, that uses complex computer models to predict the likelihood of natural and man-made disasters (including war and terror attacks) and how much they will cost. Insurance companies use the information gained from these models to figure out how much money they need to collect to cover themselves. In many cases, the insurance companies buy their own insurance policies, from super-insurance companies, to help spread out the risk of a localized disaster even further.

If you are alive, you are part of these calculations. Whether or not you’re benefitting from them is another matter. In order to find out, you’ve got to understand the mechanisms at play.

Say you want to calculate hurricane risk. You plug all kinds of information about past hurricane behavior into a model, which works very much in the same way that climate change models do. From there you run the model to see what next year’s hurricane season might look like. Then you run it again, and again — maybe 10,000 times. Now you have 10,000 possible outcomes for next year’s season. Some will be completely uneventful, some will be absolutely disastrous, and most will fall somewhere in the middle.

You may have heard the term “a 100-year storm” to describe a storm of a particular magnitude. (Hurricane Sandy, for example, was classified as a 700-year event.) What this means is not that a storm that big will only come once a century, but that in any given year there’s a one percent chance of a storm that big or worse. Of the 10,000 model runs, 100 would have showed hurricanes of that size. A 10,000-year event would represent the most extreme hurricane season generated by the model over all the runs.

Knowing the likelihood of a given natural disaster occurring is just the beginning. From there, the cost of each scenario to the insurance company must be calculated. This involves estimating the vulnerability of people and infrastructure to each potential disaster, and from that, how much money the company would have to pay out. Repeat times 10,000, and the company now can plot a curve that shows the probability of payouts exceeding a given threshold for a given type of disaster. Repeat from the top for every type of event that the company insures against, and now the company has all the information it needs to calculate its own risk and generate insurance quotes and contracts.

So how does this help you? You likely lack the time and computational power to run your own personal risk scenarios. But you can still use this information to your advantage. The basic way to accomplish this is just to shift your thinking about risk. What are the natural and human disasters that you fear in your life? How likely are they to actually occur in a way that affects you? What would be the cost to you if this were to happen? How much time and resources are you willing to put in to avoid or mitigate this risk?

And here’s the pro tip: If you’re having a hard time predicting the likelihood of a given disaster, get an insurance quote, and the experts will do the work for you. You can buy insurance against almost anything — including last minute wedding cancellations and alien abductions. So if you’re worried about it, just ask. Let insurance companies figure out the nature of the risk then consider whether you need to insure yourself, modify your behavior, or modify your thinking.

If you ask for a quote on protection against your prized bicycle from getting stolen and they want to charge you almost what the bike is worth over the course of a year, they’re telling you that there’s a really, really good chance of losing your bike in the coming months. Even if you don’t want the insurance, you benefit from this information. Maybe you upgrade your locks and rethink your overnight storage situation. Maybe you keep a beater bike on hand to soften the material and emotional loss when someone makes off with your sweet ride.

Here’s the one caveat — if you’re making a long-term investment, like buying a home, asking for an insurance quote isn’t going to give you a full picture of your risk. That’s because insurance companies only care about the likelihood of disaster befalling your house for the duration of your policy, which is typically just a year. So just because the hurricane and flood insurance on that sweet piece of beachfront property is somewhat affordable today doesn’t mean the house won’t be underwater in 20 years.