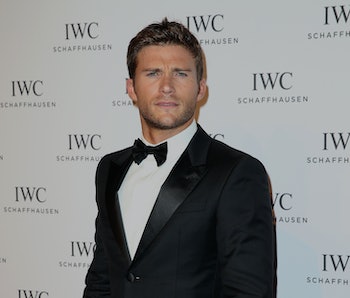 Scott Eastwood — son of Clint — is the “fetch” of the movie industry: Like Gretchen, they keep trying to make it happen, but it just doesn’t seem to be catching on. He’s in talks to be in the Han Solo prequel movie; he cameoed in that awkwardly racist Taylor Swift video; and he will next appear in Suicide Squad. Like a latchkey kid bouncing between divorced parents, Eastwood has shuffled from random project to random project, turning his cowboy-squint and tremulous smile toward the light of widespread approval in hopes of basking in it.

Can this famous multimillionaire find a place in the world, or will he forever be tragically grasping at something just out of reach, like Gatsby’s green light, hand extended futilely toward Suicide Squad, Han Solo movies, and Taylor Swift videos?

Like the creepy shelves of faces in the Game of Thrones teaser, the shelf of this particular face is full, with little room for more.

OK, so his face is already taken by a few people, but Leelee Sobieski is in the same boat with regard to Jennifer Lawrence and her career is doing fine, right? She gets just as many projects as Lawrence and nobody’s wondering where she disappeared to?

Face-replicas aside, as measure of fetchness, or fetchability if you will, let’s take a gander at Eastwood’s acting résumé. Let’s not kid ourselves: Nepotism is a thing. As Clint Eastwood’s son, it’s logical to think he has his choice of roles. And indeed, his first few roles were in his father’s movies. But once he moved on, he’s been in only inconsequential bit parts. His biggest role to date is in a Nicholas Sparks movie, otherwise known as the cinematic version of fat-free vanilla flavored frozen yogurt. Chased with a glass of milk, if you’re feeling wild.

Jeb Bush and his dairy comparisons resonate: Eastwood seems to have every advantage, and yet, wow, so much blandness. His screen presence and charisma are roughly equal to those of Sam Worthington. In some ways, this is reassuring: Although the Kardashians continue to be a thing, Scott Eastwood’s continued fetchability shows that America might still value talent and charisma as much as the notion of celebrity.

Tentpole supervillain movie Suicide Squad is Eastwood’s biggest project yet. His role is unknown, which has fueled rampant speculation. The most popular theories are that he will be playing Deathstroke — a mercenary who eventually joins the squad — or Nightwing, a former Robin to provide a potential tie-in to Batman.

Suicide Squad will then provide the ultimate test, because if America can’t embrace Eastwood as fan-favorite comic book character, all hope is lost. Come August, Eastwood’s fetchability will catch on or Hollywood will stop trying to make it happen.

Then, like his father before him, Eastwood will stand alone silhouetted against the sunset, wearing a vague squint that seems to be looking toward a future only he can see.