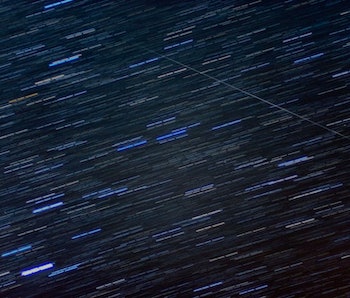 A fireball punched through the atmosphere over the Atlantic Ocean earlier this month, unleashing the equivalent of 13,000 tons of TNT. That’s an impressive interplanetary jab.

None of us saw it coming — or saw it explode.

The fireball was only spotted after the fact, thanks to NASA’s eyes in the skies. A series of cameras, trained to look for objects brighter than Venus, sighted the event. On February 6, the meteor blew up about 600 miles off the coast of Brazil and 18 miles in the air. In all likelihood, the only witnesses were whatever sea life happened to be swimming by.

Ron Baalke, a Space Explorer at the Jet Propulsion Laboratory and webmaster for for the JPL’s Near Earth Object Program’s Fireball and Bolide Reports, first shared this bit of space news on Twitter:

The last time Earth took a hit from an object this powerful, it was over Chelyabinsk, Russia on February 15, 2013 — almost exactly three years ago. Chelyabinsk brought an explosion of equivalent to 500,000 tons of TNT. Even though it burst 18.4 miles above the surface of the Earth, it injured a thousand people as shards of glass blew out from broken windows — an event so terrifying that Emory University psychologist Harold Gouzoules now uses a clip of a local woman who saw the meteorite as part of his studies on human screaming.

The February 6 event was comparatively floppier in the wrist, and probably much smaller in size. If it was composed of the same stuff as the Chelyabinsk object, the hunk of interstellar rock that exploded this month would be about five to seven meters in diameter, astronomer Phil Plait estimates at Slate, rather than Chelyabinsk’s 20-meter diameter.

If you’ve got a gut feeling that 13,000 tons of extraterrestrial TNT feels like something you should have heard about a while ago, maybe even before it actually struck the planet, that’s a fair instinct. But don’t panic. Most rocks are small, and stuff hits Earth’s atmosphere all the time — 100 tons of space matter a day, say NASA.

Something the size of Chelyabinsk arriving near a populated area is a once-in-a-century event. Plus — erroneous reports to the contrary — in all of recorded history, no falling space rock has ever smote a human.