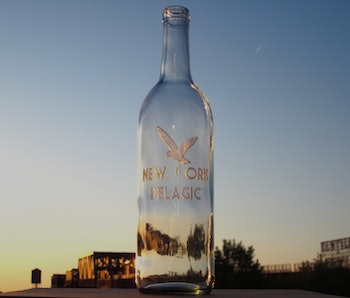 After two-and-half years at sea, a bottle chucked into the foam from Staten Island washed up 3,600 miles away on the southwest coast of France this week. Brigitte Barthélémy, the 65-year-old French painter who found it, discovered that the message inside was actually a piece of art, a sketch of a cormorant by the New York artist George Boorujy and some accompanying thoughts.

Those thoughts are perhaps best distilled by the image on the front of the bottle. It’s a Wilson’s storm petrel, a seabird that numbers in the millions but lives its life far from shore, rarely if ever encountering humans. The birds do, however, encounter our garbage. And that, Boorujy tells Inverse, is the point of the bottles he dispatches for his “New York Pelagic” project. In a sense he’s pointing out a flaw in that old question about the tree falling in the forest. Trees always make sounds because there are always animals there to hear them. Mankind is not alone.

“All of my work involves man and nature, and how we interface with animals — how we see them,” he says, “and don’t see them.”

Boorujy conceived the New York Pelagic project after seeing photographer Chris Jordan’s images of albatross chicks that had eaten synthetic material and died on Midway Island. What’s left behind are “piles of plastic surrounded by bones and feathers,” Boorujy says. “It’s beautiful and striking.” Boorujy, whose background is in marine biology, sees his bottles as a comment on the refuse that churns through the sea, wreaking havoc where humans can’t sea it.

Boorujy is particularly interested in the Great Pacific garbage patch because of its size and the danger it poses. The plastic has degraded in the sunlight, becoming particulate matter suspended in the water, mucking up animal digestive tracts and the ecosystem at large.

The garbage patch is a symptom of the fact “we value our convenience higher than sustainability,” Boorujy says. Because of gravity, because of entropy, because of ubiquity, plastic ends up in the sea — in surprisingly large amounts. The World Economic Forum predicts by 2050, pound-for-pound, the world’s oceans will contain more plastic than fish, with an estimated eight millon tons of trash dumped into the sea each year.

Those are daunting numbers, and like climate change, the implications can be hard to grasp.

Will Boorujy’s project make a difference? It doesn’t have to. It is, after all, art. That said, it’s art that serves as an effective reminder that what we create persists without us. We put beauty and ugliness in the world and often forget about both. But just because we don’t see the deleterious effects of our behavior doesn’t mean they go unobserved. Wilson’s storm petrel is watching.