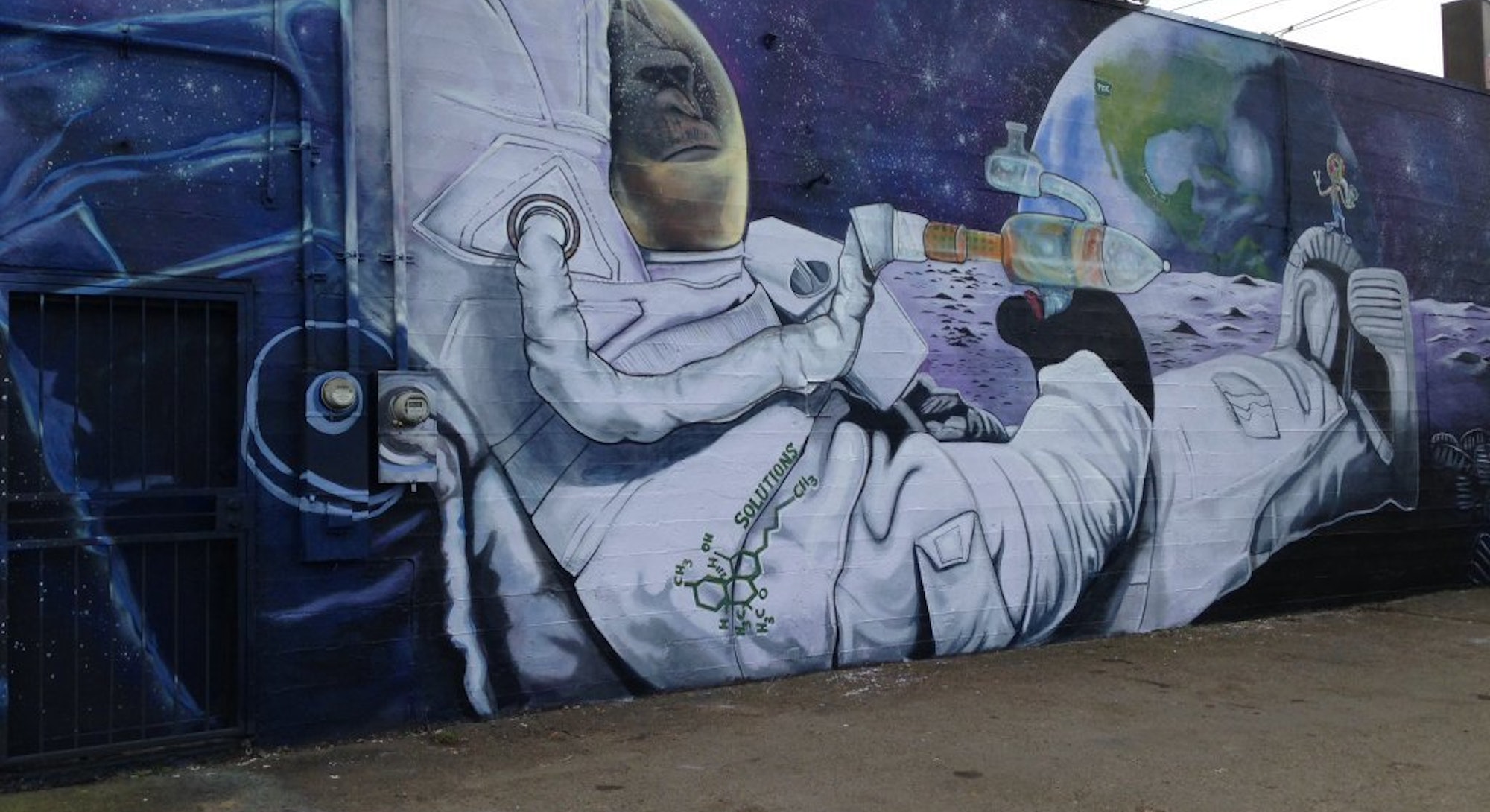 Don Van Wormer’s mural on the side of his Southeast Portland marijuana dispensary was meant to be a coded, tongue-in-cheek protest to the state’s new, convoluted marijuana laws. In Oregon, it is legal to grow and buy certain amounts of pot, but the smoking part is a more complicated issue. Theoretically, a person is legally entitled to smoke only in “private” areas. Outdoor smoking in public (streets, sidewalks, parks, bus stops, etc.) is no-go.

If you own your house, your living room or basement is sufficiently private enough to toke away without fear, but if you rent, your landlord has the right to ban smoking and even vaping indoors. Smoking on your front porch is OK as long as neighbors or passersby can’t see or smell it, and while a “private” backyard theoretically offers users legal sanctuary, if the smoke or smell disturbs a neighbor, the smoker can be written up on public nuisance changes.

Into that nanny space came Van Wormer. His initial plan was to open a place where his customers could come in to enjoy his wares in a safe, clean, fun environment — “like a clubhouse, almost,” he tells me — but he quickly learned that smoking is illegal in any commercial building. Even at a marijuana dispensary, a fenced smoker’s porch would be sufficiently public to put weed smokers and business owners at risk for fines.

“It’s crazy that a guy can plop down in a strip club all day, drinking and playing video poker and getting into all kinds of trouble, and the city is fine with that,” he says. “But having a chill place where a guy or lady can come in, smoke a bit and just hang out is illegal. Doesn’t make sense, man.”

And so Van Wormer commissioned artist Pablo Gonzalez to bring his idea of an allegorical monkey in a space suit dabbing from the moon to life. While it was definitely meant as fun way to spruce up an otherwise depressed neighborhood, it also served as a playful swipe at how the city and state have handled the burgeoning pot industry far. Here’s Van Wormer again:

“It’s a crazy class thing, right? You have to have money to start a pot dispensary, but it doesn’t mater how much you invest you’re still beholden to ridiculous rules. Plus, it’s like you have to be upper middle class to even smoke without getting in trouble. If you live in an apartment, you can still get fined or even go to jail for using a legal product. Even if you have a house, you can catch a fine if your neighbor doesn’t like the smell. For a lot of folks, it’s like the moon is the only safe place to safely smoke, and even then we gave our astronaut a super high-end dab gun to sort of symbolize how at least in this city legal weed is already becoming a rich man’s game.”

In a city that takes pride in how “weird” it keeps itself, a Da Vinci Code style pro-pot protest mural should theoretically be a big hit. At 135th and Powell, however, Don Van Wormer’s Alternative Solution’s Marijuana Dispensary is well outside the geographic and cultural bounds of the more gentrified “Portlandia” many think about when they think of Portland. It’s an area with some of the lowest per-capita income and highest crime in the city, with a population that tends to lean much more socially and politically conservative than their inner city neighbors. Outer Southeast gets plenty “weird,” but certainly not in that Fred and Carrie sort of way.

Within days, a complaint was sent to City Hall, and the story was soon amplified by a local conservative radio station. From there, Van Wormer was thrown into a bureaucratic maze of city and state laws, regulations, and permitting processes, that could potentially lead to having his dispensary license revoked altogether. The city informed him that because he had failed to get the mural approved through the city’s special mural permitting process, the painting — artistic intentions be damned — wasn’t a mural after all, but rather an “advertisement” subject to the same laws as billboards and other commercial signage.

A legally defined “mural” is considered art fully protected by Oregon’s rather liberal free speech laws. An “advertisement” containing an “animated” character actively using marijuana paraphernalia, however, violates existing Oregon Liquor Control Commission advertising laws designed to protect against targeting minors. Van Wormer was warned that after an investigation, not only could he be fined a thousand dollars for each day the mural remained, but it was also implied that the violation could put his state-issued dispensary license in serious jeopardy.

For Van Wormer’s part, he had already gone through several inspections as a part of getting the construction permit needed to make improvements on the building before opening. And though he says the exterior mural was listed as one of the improvements on his permit application and he repeatedly mentioned his plans for the mural to inspectors, no one told him the mural required its own permit.

“We had just spent countless hours and thousands of dollars getting all the permits we needed,” he says. “If anyone would have said anything about a special mural permit, of course we would have applied. We already had a construction permit, who would have thought painting art instead of a solid color on the outside would require a whole different process?”

Van Wormer has spent the better part of $3,000 to fix the mural ahead of the start of the city’s investigation: The monkey astronaut no longer holds a dab gun, but rather contentedly throws up a peace sign as sort of a symbolic mea culpa to any offended neighbors, the city, and the liquor commission. Technically, that should get him back in the city’s good graces, but Van Dormer is still worried that all the commotion might end up costing him his dispensary license with the liquor commission after all.

And while the dispensary owner has heard from a handful of people who are still uncomfortable with the mural, he says he has found a wellspring of support from within the community, estimating that over 10,000 people have already signed a petition asking the city to give the revised painting “mural” status. As for the city and state governments, he says he’ll continue to work diligently to follow the rules and regulations, and has had positive talks with officials since altering the mural, but can’t help feeling a certain sense of frustration.

“To be faced with losing the business over a painting we paid for on the side of a building we own,” he says, “of course we will continue to follow every rule and regulation, but it’s just not right. It’s a fairness issue, a freedom of speech issue, and a commerce issue. Either marijuana is legal in this town or it isn’t. The city and state should be able to figure this out without penalizing businesses and customers.”