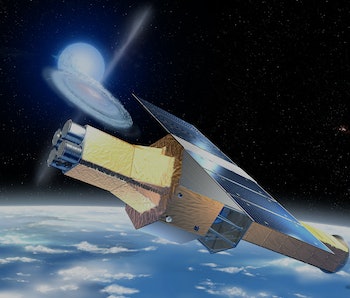 Last week, the Japan Aerospace Exploration Agency (JAXA) finally launched into space ASTRO-H, a new satellite with x-rays tasked with spotting high-energy events. The satellite, affectionately nicknamed “Hitomi,” which means “pupil of the eye” in Japanese, is basically an outer space observatory. It will serve as a lookout for violence in deep space.

X-ray signals permeate all of outer space. They are normally the result of energy-intense events, like when hot gas radiates off a supernova or particle streams jet out of a black hole. Scientists at JAXA and around the world hope that the new data Hitomi acquires will provide insight into many different kinds of astrophysical and cosmological processes in the universe, helping us understand how the universe works in greater detail and allowing us to glimpse at previously hidden phenomena.

That last goal is central to current astrophysics research. The discovery of gravitational waves — made possible only through instruments capable of detecting some of the most sensitive signals ever produced by the universe — underscores that most of what the universe does is invisible to our eyes. X-rays are a part of that, and having Hitomi up there to measure and analyze that type of activity is critical to our understanding of how stars, galaxies, black holes, dark matter, and other chemical and physical process occur.

For those of you a little fuzzy on what x-rays are, here’s a short primer. X-rays are high-energy forms of light emitted by matter in extreme conditions. For example, when a supernova explosion occurs, there’s a lot of visible light emitted, but much of the energy takes the form of x-rays, which we can’t measure through conventional equipment. The reason we want to measure them? Measuring the x-rays coming off a supernova would allow us to understand the elemental composition of the event, gauge the speed of that explosion, and help us track effects in the surrounding vicinity.

Elemental composition and speed are particularly important for understanding stars. If we want to find habitable planets, we have to look for stars that would help provide stable temperatures that would allow a planet to evolve a good atmosphere and a life-bearing environment.

The new x-ray observatory is fitted with instruments that might also help reveal the nature of dark matter, which makes up over 85 percent of all matter in the universe. Proving the existence of dark matter would pretty much be the greatest scientific discovery ever made.