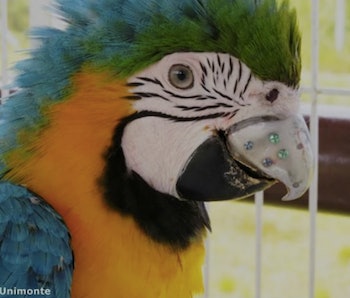 Life could have gone either of two ways for this Brazilian parrot found with a severely deformed beak. It could have succumbed to starvation, wasting away its final days in hungry defeat; or it could have fulfilled its destiny as the world’s first cyborg parrot.

Veterinarians and 3D printing experts at the Renato Archer Technology and Information Center in Brazil 3D-printed a customized titanium beak for Gigi, whom they rescued from captivity. Gigi, a macaw, needed a lightweight and rust-resistant beak to crack open the hard seeds and nuts on which she survives.

The self-described team of “Avengers,” which included a veterinary surgeon, a facial reconstruction specialist, and a veterinary dentist, has previously saved animals’ lives by 3D printing a beak for a toucan a shell for a tortoise.

Gigi’s beak was customized by first using photographs to create a life-size model, which was later converted into a beak 3D-printed with titanium.

Using bone cement and orthopedic screws, the prosthetic beak was attached, and within 48 hours Gigi had already adapted to her new cyborg life by eating solid foods. She’s recovering at the Center for Research and Screening of Wild Animals at Unimonte University, where you can watch her happily munch on some fruit.

While creating customized metal prosthetics for injured or malformed animals can give them a second chance at life, it wouldn’t be practical to use this technique to help animals on a larger scale, although more generalized 3D printing has been used to create wheelchairs for dogs. The researchers are hoping that Gigi’s triumph over the perils of human captivity will bring awareness to the growing problem of illegal trafficking of wild animals in Brazil.

More like this
Science
Jan. 29, 2023
Are coyotes dangerous to dogs and cats? Here’s how to keep your pets safe
By Tara Yarlagadda
Science
Jan. 29, 2023
Clean energy farms may endanger birds and bats — but the remains can reveal a solution
By Emma Foehringer Merchant and Undark
Science
Jan. 24, 2023
Look: With a mouth full of teeth, this Pterosaur ate like a whale
By Jennifer Walter
LEARN SOMETHING NEW EVERY DAY.
Related Tags
Share: