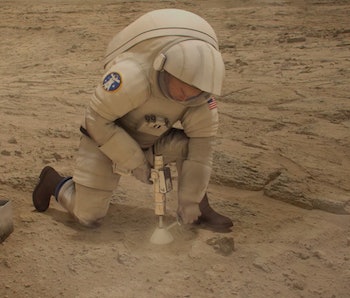 Virtual reality is crushing on Mars so hard. First, 20th Century Fox stranded Matt Damon back on Mars with The Martian VR Experience — as storytelling VR goes, it’s supposed to be pretty good. Now, NASA is getting into the game, too, with a movie/experience aimed at the more scientifically-discerning Red Planet fan: Mars 2030 VR Experience.

Mars has been a wellspring for humanity’s creative juices since H.G. Wells’ imagined invasion of Earth, but VR will put our minds 140 million miles away with an unprecedented number of pixels. Mars 2030 is a joint project between NASA, Fusion Media’s VR development arm, and the Massachusetts Institute of Technology. Announced in December, the project is getting attention for its eye to scientific accuracy.

MIT’s Sydney Do, the aerospace scholar who recently delivered an analytical suplex to the flawed Mars One project, tells Discovery News that research provides the “back end” for the game’s open world. Virtual explorers will have to monitor realistic levels of life support, food, and other resources based on Do’s work; he also emphasized the importance of minor notes like sterilization protocols to keep Earth microbes off Mars.

Mars 2030 — which NASA notes is just another step in a simulation legacy that dates back to the Mercury mission crews — will be free to play on most VR platforms. It will debut at South by Southwest in March and is aiming for wide release in summer 2016.

Riding The Martian vibes, the game is a smart move politically: Any popular interest in interplanetary exploration can only help NASA, which really wants to get non-virtual astronauts to Mars by, you guessed it, 2030.