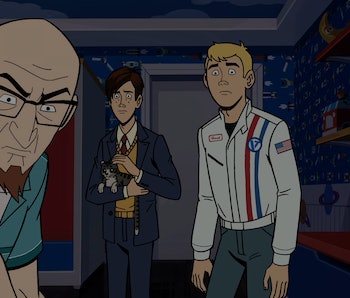 So much of The Venture Bros. newest season is on point, from its character interactions to its vastly improved animation style. Watching Dean ask Brock for romance advice, unaware that Brock has become obsessed with the show’s Wonder Woman knockoff, is such a fun and clear-cut experience that it feels like it was worth the wait.

During the show’s several-year hiatus, quite a few meandering storylines were dropped, and, as predicted, moving the Ventures to New York City was a hard reboot to the show’s system. Brock is sleeping in a too-small bed in the Venture compound where he belongs; Rusty has to face his brother’s digital ghost every morning; and the boys are now navigating the most basic aspects of adolescence despite that fact that they’re college-aged. Dean’s specific request for advice (“What do I do if she’s wearing a sports bra?”) typifies what The Venture Bros. does so well: tickle its audience by asking questions no one in their right mind would ask. Dean and Hank aren’t dumb, they just lack mental filters like their father. That’s what makes the Venture family so compulsively watchable: the fact that they’re what we all fear ourselves to be: not as smart as we want to believe, self-obsessed, and full of raw nerves and sensitivities.

The Monarch, who has proven himself over several seasons to be just as relatable as the Ventures, finally made the decision in last night’s episode to betray Dr. Mrs. The Monarch’s trust and go rogue using his father’s super-identity, Blue Morpho. Blue Morpho, of course, is a direct satirical take on the Green Hornet, complete with a sidekick named Kano (it’s Kato in the original). After watching a video that confirmed his father sometimes acted as a villain alongside Rusty Venture’s father, the Monarch gave into Henchman 21’s urging and suited up in blue.

Watching this development play out during the rest of the season will be exciting, not because The Venture Bros. is forcing yet-another change on us, but because the Monarch’s reinvention has been a long time coming. His new identity, like Dr. Mrs. The Monarch (is she Dr. Mrs. Blue Morpho now?) rising in the ranks in the Guild and Rusty returning to the lab with Billy and Pete, feels earned. If the show continues to balance experimentation with simply riffing on the structure that makes it funny, The Venture Bros. might be around for years to come.