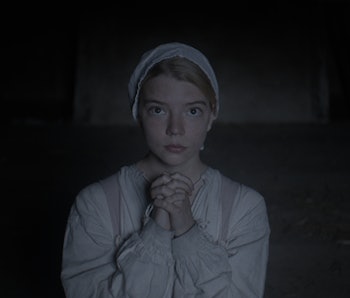 We love getting spooky at Inverse, which is why writer/director Robert Eggers’ new film The Witch is among our favorite films of the year so far. By going full bore into exploring the multi-layered themes of religion, sin, and the tug of war between good and evil, The Witch captures audiences by scaring the shit out of people the old-fashioned way. But it also gives them something to ponder while they’re having trouble sleeping later that night after they watched the movie.

One of the best qualities about The Witch — besides the entire ridiculously scary movie itself — is how it makes you think about its cinematic influences without being distracting. The movie stands on its own two hag-like feet, but it’s also the product of Eggers and his collaborators’ heavy knowledge of some of the best scary movies ever made whether they know it or not. That said, here are some movie recommendations to watch after The Witch.

What does a 1979 science fiction film about an alien stalking a bunch of deep space workers in their gigantic spaceship have to do with a new low-budget movie about 17th century Puritans losing their faith and becoming paranoid about being haunted by a witch? Not much except a whole lot. Part of what makes The Witch so effective is how it deals with its titular creature. She’s very much a present force, but not always in a corporeal sense. The fear of the witch is what drives the scares of the movie, and that same anxiety is what drives Ridley Scott’s sci-fi classic. Hell, the Xenomorph, itself, doesn’t even show up until an hour into the two-hour movie! Both movies thrive on creeping you out based on the possibilities of being scared, not overt gore. That’s what makes these polar opposites alike.

Yes, this could be misconstrued as a lazy recommendation. They’re both low-budget movies about people being terrorized by a witch, and yes, the word “witch” is in the title for both of them. But just like Alien you need to give this oft-parodied but still never-topped 1990s independent touchstone a chance after The Witch. One of the most important aspects of Eggers’ movie is its New England setting. It uses the haunted unknown of the New World in the 17th century to suggest a history that’s literally haunted by its past. While The Blair Witch Project takes place in Maryland, it’s still working with the same understanding of the creepy, undisturbed primordial evil that has always resided in the American wilderness.

3. A Field in England

If you take away the witch, keep the 17th century time period, transfer the setting to regular old England, and add black-and-white photography, director Ben Wheatley’s 2013 stately mindfuck of a movie called A Field in England is among the perfect complements to Eggers’ own film. Here’s the setup: A group of deserters in the English Civil War flee their posts through a vast field and come upon a man who may or may not be the devil. Via some bizarre concoction of alchemy, magic mushrooms, and fear, the man coaxes the group to find a hidden treasure somewhere in the field. It doesn’t sound like much, but like Wheatley’s other films, it’s a doozy, and plays around with the horror themes like The Witch, only with a semi-psychedelic slant.

Director Ken Russell’s infamous cult classic of religious depravity, The Devils, is so controversial that Warner Bros. — the studio that financed the movie when it was first released in 1971 — has intentionally declined to regularly release the movie on home video via official channels. The film, about mass hysteria and a sexually repressed nun who begins to question her faith by struggling with lust and greed, could be like an anachronistic sequel to The Witch based on all the crazy messed up stuff that goes on with its main characters.

It’s an indictment or commentary on the way religion can skew susceptible and overzealous minds, which puts it in lockstep with The Witch. It’s so gloriously perverted you can’t seem to look away. Among its most controversial scenes is the unofficially titled “Rape of Christ” sequence, wherein a group of nuns sexually assault a statue of Christ. There’s also another where Vanessa Redgrave, who plays the nun protagonist, sexually accosts Oliver Reed — who plays the local priest — after he appears as Jesus being taken down from the cross. Needless to say, your religious relatives would not like this movie.

Perhaps the biggest cinematic influence on The Witch is director Stanley Kubrick’s beloved and misunderstood-in-its-own-time horror adaptation of author Stephen King’s book. Whether it’s the deeply unsettling score that flirts with musique concrète, the geometrically beautiful cinematography, the escalating emotional paranoia of its main characters, or more, The Witch channels The Shining to its very core. It’s not easy to admit that, since Kubrick is a bona fide cinematic genius whom a lot of would-be auteurs simply rip off to prove that they’re supposedly good at what they do. But what separates Eggers’ Kubrickian tendencies with the normal Kubrick frauds is that Eggers actually understands that the cinematic flashiness is there to serve the themes of the movie. You can only portray inherited madness with a deft hand, and The Shining and The Witch are two that understand that perfectly.