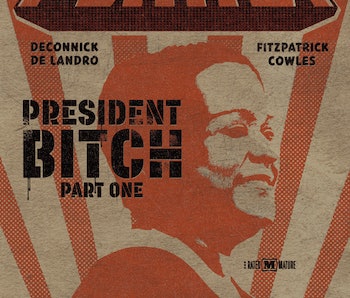 This week was big for female-led comics, indie publications, and horror. Based on everything I picked up at my local comic store this week, I’m going to make recommendations for culture nerds who haven’t taken that first step into comic books.

Though many of us are content to watch genre fiction in the comfort of our homes, collecting and reading comics requires an extra smidgen of commitment. In order to keep up with comics, you need to have a local shop (preferably not a Newbury Comics), and once you’re hooked, you’ll be visiting often enough that the staff will recognize you. If you’re really a pro, you’ll reserve a pull list, so the staff at your comic shop knows to put new issues of certain comics into your box. My box is number 114 at Comicazi. Check out what I got!

Anyone who watches sitcoms on the CW, whether ironically or not, will enjoy Archie comics in their new form, but the series’ real spiritual twin is Gossip Girl. The dialogue in the comics isn’t as punchy as Jane the Virgin or Crazy Ex-Girlfriend, but the drama that unfolds between the bright-eyed adolescents — especially between Veronica and Reggie Mantle — feels like early 2000s Chuck and Blair.

Kelly Sue Deconnick’s innovative battle comic has returned after its long hiatus, and its primary characters are still reeling from the accidental death of their smallest comrade, Meiko. We get a lovely scene between Penny and Kamau midway through this issue: The women sit naked on the floor of their prison shower and discuss Meiko, and what’s to be done with “the motherfucker who broke her neck.” Angelica Jade Bastién contextualizes this scene within the history of the “strong black female” archetype, in an essay that the comic includes in its final pages.

The obvious TV comparison here is Orange Is the New Black because Bitch Planet shares a lot with the wildly popular Netflix show — both rely on a lovable cast of ethnically diverse women, and both are set in a women’s prison — but Bitch Planet is far headier, and far more conscious of philosophical feminist theory than OITNB. A more apt comparison would be to TV shows that pride themselves on dialoging with academic theory: Rick and Morty, True Detective, and Hannibal fans will appreciate Bitch Planet’s density.

Gail Simone’s trippy, psychological horror comic returned this week, putting its primary villain Astrid in a new position. The comic has been unnerving since it began, but watching the character who’s been orchestrating the scares get spooked by her own torture chamber is downright disturbing.

Clean Room is fantastic and full of vibrant art, but it is grim, and should be read by only those who aren’t afraid to have fiction crawling around under their skin. Fans of The Leftovers and Black Mirror know what I’m talking about.

DC has been shoving Harley into every comic series it has, in order to capitalize on the only vaguely interesting character in Suicide Squad. Inverse’s own Lauren Sarner has a lot of opinions on Dr. Harleen Quinzel, M.D., regarding her onscreen appearances and animated form. I personally prefer the madcap Harley present in DC’s Bombshells comics, but Harley in her solo run is interesting, too.

Unlike other iterations of Harley, her solo run depicts her relationship with the Joker as abusive and unhealthy. In this week’s issue, she finally comes face to face with the guy she once called Puddin’, trying to negotiate for her new boyfriend’s life. It’s refreshing to see DC call a spade a spade: The Joker is an asshole, and Harley’s over it.

Harley’s appeal is very slim to mainstream readers: She’s not the sexy version from Suicide Squad, and isn’t a goofy clown like she was in the original animated Batman series. Those who like their female protagonists imperfect will appreciate her, though, so I’d recommend Harley to anyone who watches iZombie or Crazy Ex-Girlfriend. She’s manic.

Writer Joe Harris, of The X Files, released the first issue of his dystopian sci-fi comic this week. While the story seems intriguing — a new America run by the Hazeltyne corporation is visited by a mysterious force who looks like Mr. Freeze — the art is uncomfortably dated-looking.

The comic is an Image release, however, and the publishing company that distributes Saga, Rat Queens, and Paper Girls knows only how to produce critical and commercial hits. Snowfall leans heavily on the environmental aspects of its conceit, which might become preachy after a few issues. I remain optimistic because I trust Image’s judgement. The tone of Snowfall caters to those who like their sci-fi rooted in reality and very serious, so have at it, fans of the The 100 and Colony.

Marvel saw its female Thor’s stunning success and committed fully to its new premise, carrying Jane Foster’s character into its “All-New, All-Different” universe. Unfortunately for Marvel, this issue is still hung up on the controversy surrounding the “All-New, All-Female Thor.” The publishing house has really gone full-force into fictionalizing its imagined public outcry against Thor having a vagina, making her an enemy of Asgard and a character for the former Thor to grumble about.

Those who enjoy staunchly political fiction will get a kick out of Thor fighting her way into relevancy. It’s like a not-funny Broad City or Full Frontal With Samantha Bee, or a female-led Last Week Tonight.

Though the issue begins with a bang, that momentum quickly peters off once the comic starts to lay down its character backstory and explications. It falls prey, just a bit, to the hardest obstacle when transitioning video games to film or comics: the details gamers typically take for granted about their protagonists, comic book readers typically want explained in back issues and dialogue. Tomb Raider’s first issue, however, might just be a shaky pilot episode that could turn into an engaging series. Anyone who still watches Xena reruns or tunes in to any of the small-town superhero B-list shows (Agent Carter, Arrow, The Flash, Agents of S.H.I.E.LD.) will enjoy how detailed Lara Croft’s backstory is attempting to be.

More like this
Entertainment
7 hours ago
Frankenstein is returning to the Hellboy universe in a post-apocalypse adventure
By Jeff Spry
Entertainment
5.4.2022 12:43 PM
Moon Knight ending explained: What’s next for Scarlet Scarab and more?
By Jake Kleinman
Entertainment
5.16.2022 12:00 PM
29 years ago, Marvel unleashed Spider-Man’s scariest enemy ever
By Richard Newby
Share: