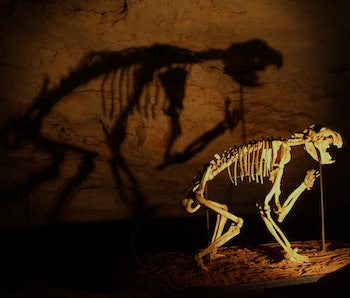 Australian ecosystems, famous for their hell beasts of every stripe, were also awesome thousands of years ago: New research from paleoecologists at Flinders University in Adelaide indicates that Thylacoleo carnifex — a tiger-sized relative of the koala — was an expert climber capable of catching giant kangaroos and aboriginal humans unaware.

Though the bloodthirsty “drop bear” doesn’t exist outside the minds of social media users who believe the Aussie “leopard-sized koala” feasts on human blood, T. carnifex was very real.

The research team writes in the journal Scientific Reports that not much is known about this so-called marsupial lion. But they were able to examine deep scratches in the walls of what’s known as Tight Entrance Cave — scores into the soft rock up to nine feet off the ground — which the Flinders team argue is good evidence these animals could climb.

The researchers had to systematically eliminate the possibility the claw marks belonged to other species — the ancient claw marks were too deep to be possums and too numerous to be wayward koalas, leaving T. carnifex as the most likely culprit.

Based on the remains found in the cave, these researchers describe this real-life drop bear, charmingly, as a “flesh specialist,” stripping meat from bones rather than chewing on them. Previous hypotheses included diets of primarily crocodile eggs or melons, but that it ate meat now seems quite convincing.

Though Thylacoleo carnifex is not, in fact, closely related to cats, biologists have posited that, would an African lion and T. carnifex had found themselves in a cage-match out of the Discovery Channel’s fever dreams, the marsupial would have won. As University of New South Wales biologist Stephen Wroe argued in support of T. carnifex’s lion-killing potential in 2008:

“My results suggest that the marsupial lion employed a unique killing technique. It used its massive carnassial cheekteeth to effect major trauma and a rapid kill. Unlike any living mammalian carnivores, the marsupial’s carnassials were not only butchery tools but also active components in the killing process.”

Australians don’t need hoaxes to convey how badass marsupials can be — they just need to go back 50,000 years.

Or, you know, just listen to a koala roar:

More like this
Science
Sep. 28, 2022
In a first, scientists show that dogs can smell when humans are stressed
By Elana Spivack
Science
Sep. 25, 2022
Why do cats love cardboard boxes? Pet experts decode the obsession
By Tara Yarlagadda
Science
Sep. 23, 2022
We finally know how many ants are crawling the Earth right now
By Jennifer Walter
Related Tags
Share: