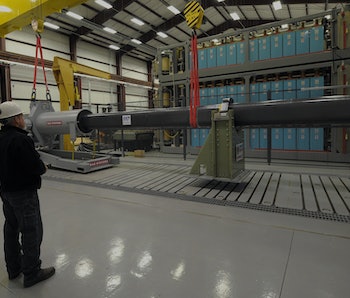 Gone are the days of rudimentary weaponry: The United States Navy wants operational railguns onboard destroyers by 2018.

Gunpowder, step aside. The future has arrived.

Railguns weaponize good old electromagnetic propulsion. (That’s the tech responsible for those absurdly high-speed trains you’ve no doubt heard about.) It’s unclear whether the word “weapon” even applies here: railguns are unfathomably lethal, capable of launching projectiles into the ether at seven times the speed of sound. And the projectiles can travel unfathomable distances. Theoretically, the projectiles (which look something like — I don’t know — wrenches that a young King Kong might’ve once used) could make it a casual 30 miles in about 20 seconds. But even that is child’s play. The Navy’s hoping to launch these puppies over 100 miles across the ocean.

In some senses it’s a different philosophy: instead of launching relatively dawdling explosives at distant targets, railguns propel what are essentially 40-pound bullets at those same distant targets to simply impale (or “transfix”). But these projectiles are so heavy and traveling so fast that a) they’re exceptionally difficult to detect before it’s too late and b) they don’t just impale or transfix, they shred — and then continue on their path into destructive oblivion.

If you haven’t seen these weapons in action yet, look no further:

The Navy initially planned on putting the railguns through an at-sea trial phase, an idea so rational it just begged to be abandoned. Rear Admiral Pete Fanta, like a kid in a candy store, was just too fired up for that plan. The AP reports that Fanta wants to see them on the USS Lyndon B. Johnson, a Zumwalt-class destroyer that’ll set figurative sail in 2018.

“The Zumwalt-class is one of a number of options being explored for the electromagnetic railgun,” Lieutenant commander Hayley Sims, a Navy spokeswoman, told the AP. “Due to the size, weight and power requirements, some platforms will be better suited for the technology than others.”

And, given LBJ’s notorious authorization of Agent Orange’s use in Vietnam, this plan seems apt. Take this horrifically lethal, emerging technology and throw caution to the wind. Ask questions later.

More like this
Culture
1 hour ago
The End of the Cold War Could Have Killed James Bond. Instead, it Made Him Stronger.
By David Grossman
Culture
1 hour ago
If you loved Nick Offerman in The Last of Us, check out the series he starred in right before the world shut down
By Dais Johnston
Culture
3 hours ago
A Failed Sci-Fi Sequel Stunt Accidentally Set the Standard for the Forgettable Netflix Movie
By Hoai-Tran Bui
LEARN SOMETHING NEW EVERY DAY.
Related Tags
Share: