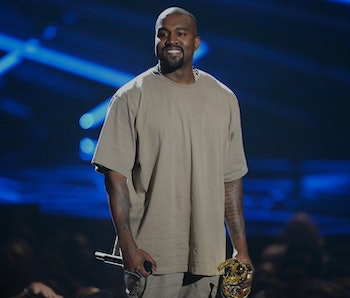 In an epic Twitter storm on Sunday, Kanye West unveiled more than just his usual array of rambling thoughts and criticisms. He dropped an entire business plan. The business is DONDA, a design and communication company in the mold of IDEO that does everything from “yatchs (sic)” to “HIV.” Among its many other initiatives, DONDA apparently hopes to patent a system for emoji autocorrect.

This could prove difficult.

Though Kanye does hold a patent for the “7 screen movie experience,” a form of staging he pioneered for one of his fashion shows, he doesn’t hold a patent for parsing unicode and he’s unlikely to get one. Emoji autocorrect is such a good idea that numerous apps for both Apple and Android offer emoji suggestions and predictions. Instead of requiring you to scroll through the full emoji samplings, the keyboards recognize certain strokes as emojis and replace the text automatically for you. Phrases like house and airport trigger emoticon suggestions as well.

In other words, the USPTO will not be issuing a blanket patent for emoticon autocorrect any time soon — unless, that is, Yeezy has developed a substantively different technology on the DL. It would have to be pretty advanced to recognize sarcasm and irony, two key components of higher level emoji use, but Kanye is a demonstrably intelligent individual and would certainly be aware of these hurdles.

According to Kanye, he developed the chart for DONDA over four years ago, before the advent of emoji prediction/suggestion. He only debuted the ideas to select investors who, in the end, turned him down.