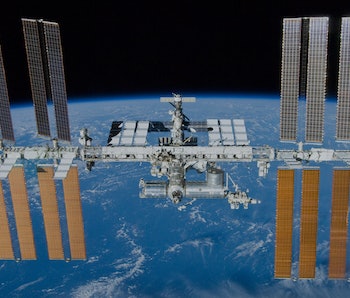 Everyone has heard about that one Nigerian prince who needs help transferring his fortune. But how about the stranded Nigerian astronaut who needs some cash to get home? Well, he’s out there in orbit and you’ll be rewarded handsomely if you help him make it back to Earth.

I am Dr. Bakare Tunde, the cousin of Nigerian Astronaut, Air Force Major Abacha Tunde. He was the first African in space when he made a secret flight to the Salyut 6 space station in 1979. He was on a later Soviet spaceflight, Soyuz T-16Z to the secret Soviet military space station Salyut 8T in 1989. He was stranded there in 1990 when the Soviet Union was dissolved.

In the 14-years since he has been on the station, he has accumulated flight pay and interest amounting to almost $ 15,000,000 American Dollars. This is held in a trust at the Lagos National Savings and Trust Association. If we can obtain access to this money, we can place a down payment with the Russian Space Authorities for a Soyuz return flight to bring him back to Earth. I am told this will cost $3,000,000 American Dollars. In order to access the his trust fund we need your assistance.

Intriguing. But what’s in it for us?

Consequently, my colleagues and I are willing to transfer the total amount to your account or subsequent disbursement, since we as civil servants are prohibited by the Code of Conduct Bureau (Civil Service Laws) from opening and/ or operating foreign accounts in our names.

Needless to say, the trust reposed on you at this juncture is enormous. In return, we have agreed to offer you 20 percent of the transferred sum, while 10 percent shall be set aside for incidental expenses (internal and external) between the parties in the course of the transaction. You will be mandated to remit the balance 70 percent to other accounts in due course.

Okay, this part is a little complicated. Can we just give you our social security, credit card, and bank account numbers, and you take care of it?

We never heard back from Dr. Tunde, so we can’t verify his legitimacy, but we’re beginning to think it might be just another phishing scam. It certainly has the classic signs. According to a report in the The Wall Street Journal, these phishing scams are supposed to seem ridiculous to most people. That way, only the truly gullible will respond, and the scammers won’t have to waste time with the skeptics. That makes sense from a cost-benefit perspective. If you’re trying to make money off of idiots, it’s better to find them quickly.

On the plus side, the scam feels like a sign of the progress humanity is making in space. With all the reports of private spaceflights, Indian rockets, Chinese lunar probes, and even Martian colonies, who’s to say there aren’t any Nigerian astronauts stuck in orbit? (Well, we are. But it’s still nice that the situation sounds vaguely plausible.)

More like this
Innovation
5.6.2022 10:30 AM
This futuristic telescope would use Einsteinian physics to find Earth 2.0
By Elizabeth Howell
Science
5.5.2022 10:30 AM
A massive societal problem for humans is also harming animals
By Tara Yarlagadda
Innovation
5.18.2022 6:37 PM
One simple thing makes the Nissan Z a perfect sports car
By Jordan Golson
Related Tags
Share: