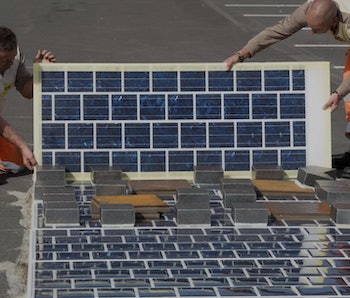 The French government has announced plans to outfit 1,000 kilometers (630 miles) of roads with solar panels, potentially generating enough electricity to provide energy for 8 percent of the nation’s people within five years.

The proposal calls for the installation of Wettway solar panels, which the developers at the Colas Group call the world’s first photovalic road surface. The inch-thick panels harness energy through thin polycrystalline silicon coverings. They are designed to be able to resist overhead weight of a truck and offer the same traction as asphalt.

Colas announced the Wettway panels back in October, and the French government is by far the most ambitious early adopter. A Dutch town installed solar panels on its bike path last year, and an American couple made waves when they took in over $2 million in an Indiegogo campaign to help them develop similar technology, but neither of these initiatives have yet to reach the scale of the French project.

The 1,000 kilometers of road renovation would require significant investment from French authorities, but one likely prospect to raise funds is a tax on fossil fuels. The panels can be placed directly on top of existing roads to make installation easier.

While a number of questions remain about how the panels will fare in inclement weather and how they will impact the cost of road repairs, the move is a major step forward for dreamers who think we can use energy more efficiently.

One added bonus of the project is that due to asphalt’s dark color, roads and parking lots actually exacerbate the warming of the atmosphere by reflecting the sun’s rays, which the ground would normally absorb. We would need a lot of solar panels to reverse this process, but by paving driveways and parking lots, which form major reflecting spots but are the least threatening roadways, we would be attacking climate change on two fronts without jeopardizing driver safety in any way.