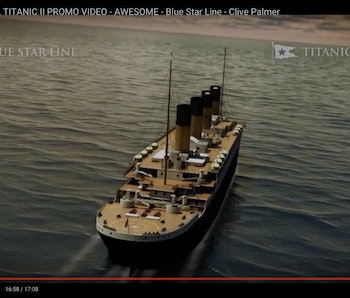 The world is getting antsy for the maiden voyage of Titanic II, a replica of the ship that famously sank in the North Atlantic more than a century ago. It’s hard to trace what exactly set off a flurry of news related to the project this week — most have hooked onto a year-old article in the Belfast Telegraph in which a spokesperson said the project was not on ice — merely delayed two years to 2018.

The ship is the audacious brainchild of Australian billionaire and politician Clive Palmer, to be built by his shipping company, Blue Star Line. It was to offer a perfect replica experience of the original ship, except with enough lifeboats for all the passengers.

If you, like Snooki, are still holding out hope on fulfilling your 1997-style fantasy of ballroom dancing with Leo, and/or you have a weird thing about dressing up in early 20th century period costume, you should probably stop holding your breath.

Palmer is also in the news this week related to the financial collapse of his mining company, Queensland Nickel, which owes creditors about $100 million. Palmer may even face criminal charges related to an investigation of his business dealings, which include allegations that he used an alias to act as a shadow director of the mining company.

Meanwhile, Blue Star Line hasn’t issued a press release since mid-2014, which is as long as it’s been since @titanic_ii composed a tweet. The promo video for the project is a bizarre 17-minute compilation of archival photos, man-on-the-street interviews, digital artist’s renderings, and interviews with workers at a Chinese shipyard — none of which provide any evidence that a ship is actually being built.

Palmer himself may have last spoke to the project on a radio show in early 2014, when he said the goal was to lay the keel down for the ship in September of that year. “I would have liked to have done it quicker, but we want to make sure we don’t make any mistakes on this one,” he said.

Titanic II is a lesson in things that sound cool but that you probably shouldn’t make a half-a-billion dollar bet on, even if you have half a billion dollars. You heard it here first: this dream is as sunk as Jack Dawson.