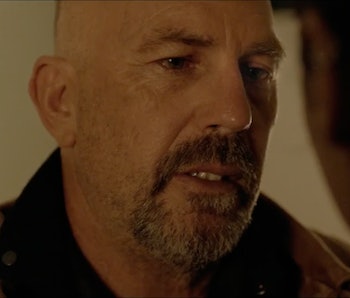 The first official trailer for Ariel Vromen’s Criminal was released today, marking a higher profile role for its aging action star, Kevin Costner. Though Criminal is filled out with an insanely awesome cast that includes Gary Oldman, Tommy Lee Jones, Gal Gadot, and Ryan Reynolds, the first trailer is clearly Kevin Costner’s show. There’s still a lot to know about this April film, but the first footage and the pedigree hint at something that may be, at the very least, a welcome surprise.

While he’s been working consistently since the mid-’80s, it’s been a long time since Kevin Costner was truly a star. He still has his fans — count me in! — but his film status now veers between straight-to-DVD action movies and generally low visibility theatrical releases. He doesn’t require much assistance to earn back a film’s budget, but Costner also plays it safe by picking low budget roles that play to his strengths. Then, something like this happens:

It’s a tone that Costner has been leaning on more and more lately, the evil man looking for a shot at redemption (just like in 2014’s 3 Days to Kill), however, the early footage in the trailer hints at a kind of unleashed rage that Costner has been reluctant to show on film throughout his career. That alone may make this one a worthwhile watch.

The supporting cast is also too good to overlook, and the studio definitely doesn’t want you to forget the supporting cast. Just check out the film’s poster, below. In spite of the fact that Oldman is loud about his willingness to take a role just for the money, he still has a solid reputation for picking high quality stuff. Tommy Lee Jones is the same. On the other hand, Ryan Reynolds is kind of like weird movie kryptonite, so his presence alone could spell doom for Criminal.

When the film was optioned back in 2013, Deadline described it as, “an action movie about the right man in the wrong body. In a last-ditch effort to stop a diabolical plot, a dead CIA operative’s [Reynolds] memories, secrets and skills are implanted into an unpredictable and dangerous prison inmate [Costner] in hopes that he will complete the operative’s mission.” It’s a pretty intriguing near sci-fi plot that could very easily veer into silliness if not handled correctly.

So, with all that in mind, the team behind the camera is equally confusing. The screenplay was written by Douglas Cook and David Weisberg, the same two guys who wrote The Rock (so you know they have action chops). That said, these fellas haven’t had a writing credit since 1999. Where did they go?

At the helm is director Ariel Vromen, the man behind the convoluted mess that was The Iceman, the Michael Shannon vehicle about the most successful contract killer in history. Not exciting enough to work as an action film and way to shallow to be a workable drama, the only one who came out of that one unscathed was Shannon himself.

If Vromen has, in the last two years, learned how to develop a character, and if Cook and Weisberg haven’t lost their touch in the last decade and a half, then Criminal might be a John Wick-style highlight in the spring. That’s a lot of ifs, though.