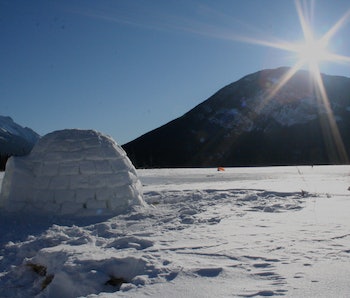 Any grade school kid can tell you that an igloo is a scoop-shaped home made of compacted snow and ice by Inuit tribes. What they might be less capable of describing is why igloos work so well as compact, insulated shelters. Ask the kid about that and he’ll probably just go play PS4 or sign up for Obamacare, or whatever. That’s understandable because the forces at play here aren’t just heat and cold. It’s more complicated than that.

Snow — like its liquid predecessor, water — exhibits some amazing characteristics. One of those characteristics is that snow acts as an incredible insulator. That’s why so many animals, like bears, raccoons, and skunks find it useful to use snow to build the shelters they crawl in to hibernate.

Although it’s literally frozen, a large percent — between 90 to 95 percent — of snow is just air trapped in little ice crystals. That air doesn’t circulate very well, so heat stays pretty well trapped within a compact, mostly closed-off space. So what about igloos? What makes igloos so damn good at providing shelters to Homo sapiens?

Traditional Inuit igloos work because of their structures. They are catenoids, which means they’re perfectly optimized to ease structural tension. This is important because snow, as many of us know, is not always a super stable building material. Even in a compact state, snow changes over time as the temperatures rise and fall. You need something that won’t buckle as stressors push on the structure, and a catenoid ensures those pressures are compressed toward the sides of the dome and not through the middle of the ceiling.

Ideally, the entire wall of the igloo is built with a uniform thickness and density. The best kind of snow to use has probably been blown by enough wind to make it compact and solid. Think of the difference between freshly fallen snow, and snow that’s a couple days old — the former is fine powder, while the latter is crunchier and can be packed into different shapes and blocks. An igloo that’s built the right way is usually composed of individual blocks stacked on one another in an upwards spiral. They should stay upright and lean against each other without any additional support structures. If you can stand on the roof without the ceiling caving in, you’ve built a good igloo.

Many igloos also feature a tunnel entryway that reduces heat loss and prevents the wind from getting in. Thick animal skins make for pretty good doors

Best of all, igloos stay warm. Though average temperatures outside can be several-dozen degrees below freezing, the interior of an igloo can be warmed by body heat alone and provide an interior climate ranging from between 19 degrees Fahrenheit to as high as 61 degrees Fahrenheit.

This is because hot air rises while cold air sinks. The key for any igloo is to create a dip inside that allows excess cold air to sink and move towards an isolated part connected to the entrance, while the rest of the interior stays elevated and is surrounded by warmer air — particularly the sleeping area.

The most remarkable thing about igloos may well be how easy the are too build. With enough snow and a good sense of the catenoid structure, the whole process takes only a fewer hours. That makes the DIY approach ever so slight more practical than paying $200 a night to stay in someone’s Airbnb snow construction.

More like this
Science
19 hours ago
Is my dog depressed or happy? Pet experts explain how you can tell.
By Tara Yarlagadda
Science
8.6.2022 11:00 PM
Senior dogs could help us understand an incurable brain condition
By Lesley Evans Ogden and Knowable Magazine
Gaming
8.6.2022 4:00 PM
Forget Stray — this Xbox Game Pass indie is one for the dog lovers
By Mo Mozuch
Related Tags
Share: