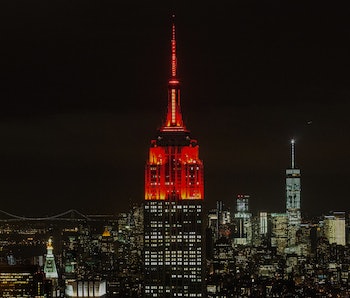 A self-declared philanthropist says all he “wanted was to shoot 5 seconds of video to promote a non-profit” when his drone collided with the 40th floor of the Empire State Building and then fell to a landing on the 35th floor.

After a significant police response, 29-year-old Sean Nivin Riddle was taken into custody and is now facing reckless endangerment and “illegal aviation in and over the city” charges.

While even Riddle seems to understand crashing into a national landmark is frowned upon, he does dispute whether he should have known that flying a drone near it is illegal, arguing on Twitter that he even asked a cop beforehand who told him to go ahead.

He also defended himself by referring to a site that does incorrectly indicate drone enthusiasts may fly through most of lower Manhattan.

Pleas for common sense aside, if Riddle did ask a cop who told him to go ahead with the flight, he has stumbled upon a genuine problem with the sudden wave of drone flights in populated areas. Sure, there is no real legal ambiguity about flying near the Empire State Building. The Know Before You Fly site that the Federal Aviation Administration has endorsed clearly shows the area as restricted.

Lower Manhattan is rife with heliports that make flying a drone dangerous, but Riddle did seem to have demonstrated some diligence in assessing the area. We’re not saying let Riddle off without a slap on the wrists, but a new technology that grows as quickly as drones have requires diligence on behalf of lawmakers to ensure drone users understand the official guidelines.

Police have to understand the regulations, and it should be clear online what constitutes official rules. Without these two steps, any regulation poses an unfair burden to drone operators who want to follow the law but don’t know what it is.

We’re not saying #freeriddle or anything like that. After all, dude did crash a plane (small as it is) into a major landmark in New York — and one that still smarts from the plane crash into the 79th floor that killed 14 people on a foggy day in 1945. For obvious reasons, New Yorkers tend to get a bit jumpy when you start crashing flying objects into skyscrapers.

More like this
Innovation
Sep. 21, 2022
Look: Drones could be the future of 3D-printed architecture
By Jennifer Walter
Innovation
12 hours ago
Worm spit could be a secret cure to the world's plastic problem
By Molly Glick
Innovation
Oct. 2, 2022
Want a better relationship with your dog? Neuroscientists say these 7 factors are key
By Tara Yarlagadda
Share: