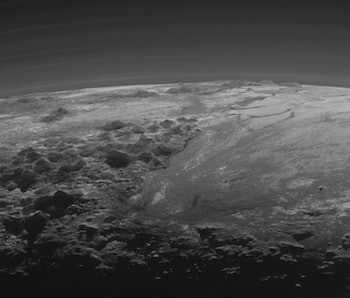 If you haven’t already seen pictures of Pluto’s epic glaciers taken by NASA’s New Horizons probe, you need to check them out pronto. And when you’re done, come back and I’ll explain the tale of the dwarf planet’s strange hills of water ice sitting on top of those nitrogen ice glaciers.

Back? Okay good. Here’s the deal: when New Horizons went on its flyby of Pluto last year, it snatched up a bunch of great pictures of Pluto’s massive glaciers made of frozen nitrogen. (The freezing point of nitrogen, by the way, is -210 degrees Celsius. Those are some cold-ass glaciers.)

But one of the images highlighted something peculiar: There are these weird, isolated hills that seem to just be floating on top the glaciers like it’s no big deal. NASA scientists think those several-miles long hills might be floating chunks of water ice accrued from the planet’s surrounding uplands.

They’re part of the ice plain informally known as Sputnik Planum. The hills, according to NASA, are probably mini versions of much bigger mountains on Sputnik Planum’s western border.

So what’s going on here? How are hills made of water ice just floating on top of a sea of frozen nitrogen?

Water ice is actually less dense than nitrogen ice. Most likely what’s happening, NASA scientists think, is that fragments of ice from the uplands are breaking away and being carried off by the Sputnik Planum glaciers, creating “chains” of drifting hills forming along the flow of the nitrogen ice and cluster up into huge groups that can reach up to a staggering twelve miles in length.

The northern edge of the image shows a feature known as Challenger Colles — named after the crew of the Space Shuttle Challenger disaster. Around here is a section of hills scientists think have been “bleached” by UV light, due to the nitrogen ice being particularly shallow.

NASA rolls out images from New Horizon’s study of Pluto every Friday. Check back with us next week to see what’s next.