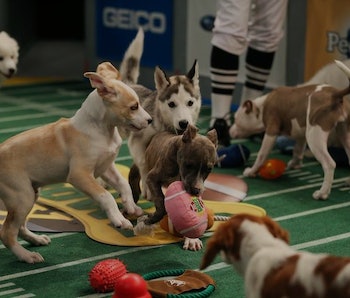 The Puppy Bowl is supposed to be a gentle antidote to the mindless aggression and belligerence of the Super Bowl. Way back in the innocent days of 2005, broadcasters believed there was whole world of sweet peaceful folk out there, looking for a reprieve from the sick, forced consumption of violent sports. Those generous broadcasters just wanted to give those good souls the wholesome programming they deserve.

They couldn’t have been more wrong. Puppy Bowl fans are foaming-at-the-mouth savages, just like their football-watching counterparts.

Not that they’re aware of it, of course. How could they be? They naïvely think they’re in it just to see Jack Russells and Labradoodles clambering over each other in a rollicking game of plush-football fetch. But while they think they’re innocently squealing over Team Fluff’s overwhelmingly cute quarterback, what they’re actually doing is stoking the flames of frenzied aggression — and they love every fucking minute of it. It’s no different than watching the Panthers and Broncos knocking each other around on the turf.

These are examples of a psychological phenomenon known as “dimorphous expression,” a term referring to situations where a positive trigger — say, the world’s cutest Beagle quarterback — induces a negative behavior, like screaming or crying or, in surprisingly frequent situations, choking or punching. These, of course, are not “normal” responses; they’re the result of a brain temporarily overloaded by too-cute stimuli to know how to react properly.

But who said that was a bad thing? Sure, it sounds insane, but when it comes down to it, the overwhelming feeling of lost control — the “cute aggression” stimulated by the flood of happy feelings seeing a Havanese score a touchdown — actually feels pretty good. Studies have shown that exposure to cuteness increases activity in the brain’s “pleasure centers,” causing a rush of dopamine similar to that triggered by sex, chocolate, and — you nailed it — football.

As Jon Wertheim and Sam Sommers describe in their new book This Is Your Brain on Sports, fMRI studies have shown that activity in the brain’s pleasure center spikes when we see our team succeed — or the rival team mess up. A 2010 study by authors at Princeton University studied a sample of Red Sox and Yankees fans, observing that New Yorkers experienced a surge of joy when Boston fucked up — and vice versa. Those are the same neurochemical reactions happening when we see puppies running aimlessly back and forth after some ball or chew toy.

In other words — the physiological reasons we get a rush out of football are based on the same evolutionary processes that explain why we literally can’t even when we see something cute.

As Inverse’s Sarah Sloat so succinctly put it in her story about why humans respond so bizarrely to cuteness: “This is a universal human thing. This is biology.” Whether you’re a fan of football or a fan of puppies, you’re cheering for the same reason: The game induces a sense of pleasure that’s out of your control

Keep that in mind this coming Sunday, no matter what your plans are. Puppy Bowl fans looking to get away from the barbarity of sports do not exist on a higher moral plane than Broncos and Panthers fans hoping to see their respective teams triumph. In the end, as football fans know too well, we are all at the mercy of our own brains.