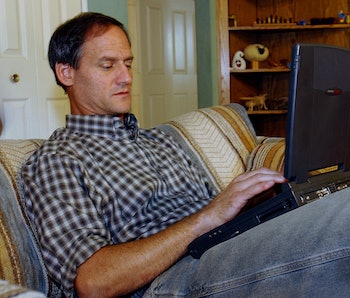 Men face stigma when they ask for flexible working arrangements, according to new research out of Australia.

The report found that women who arrange to work part-time, work from home, set their own hours, or take a leave of absence are happier with their employer than those who do not. However, the opposite was true for men.

“My boss told me I wouldn’t be able to get promoted working part-time,” one male survey respondent wrote. “Part-time is traditionally only something we make work for women,” another respondent was told by a manager.

Women with flexible schedules were more likely to want to advance in their careers, and more likely to believe that it is possible, compared with those working 9 to 5. The opposite was true for men.

When women seek flexible arrangements so they can accommodate work on top of their responsibilities outside of their job, they are seen as ambitious and driven. On the other hand, when men seek flexible work so they can spend more time at home, they’re seen as uncommitted. Who picks up the slack when their managers tell them “no”? Very likely, it’s women.

The newer report notes that workplaces with good policies promoting flexible work have happier employees than those without, and recommends that all businesses implement policies and pay attention to how well they are working for both men and women.

This is particularly important, the authors write, because the millennials are coming: “The current generation of new recruits, known as millennials, has very different work expectations than their baby boomer parents. Survey after survey has shown what millennials want most is to work flexibly.”

So there you have it. Women have fought for decades to be included as equals in the workplace, and they have made some gains. If men want equal access to the many magnificent facets of human existence outside of the cubicle, they’re going to have to fight for it, too.