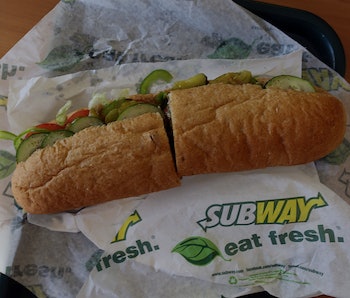 Subway’s announcement that it’s bumping its five-dollar-footlongs to six-dollar-footlongs isn’t just a squeeze on sandwich fiends who don’t have access to a Jimmy John’s. Rather, it’s the end of an era. For nearly a decade, the promotion resonated not just because of its simplicity and damn-whatta-deal price, but because it was accompanied by the greatest commercial jingle America has yet to devise in the 21st century.

The song grew out of the simplicity of the deal itself. What is it we’re selling? And at what Great Recession-proof price? A couple of ad men decided the way to sell sandwiches was with this Bukowski-lean messaging. They got right to the point, and then they got right to the point again. And again. As they explained for this 2008 Slate story on the origins of the insidious earworm:

“We didn’t want any blabbing,” say Jerry Cronin and Jamie Mambro of MMB. “It was just, let’s see how many times we can say ‘five dollar foot-long.’ Let’s mention it as many times as possible without making someone hurt us. We wanted to make sure no one would miss the message.”

They quickly realized the best way to accomplish that goal (barring an embrace of the controversial “HeadOn: Apply directly to the forehead” method) was to embed the phrase in a jingle.

This no-nonsense approach was so successful that the tune colonized your soul as surely as a Lennon-McCartney hit, leaving some of us just as upset at its end as we were when the Beatles parted ways. Six-dollar footlongs? It just doesn’t sound right.

“The chord structure does imply something dark,” he agreed, getting out his guitar to demonstrate over the phone. “On the word long, [the guitar part] goes down from a C to an A-flat,” he said, strumming, “which is kind of a weird place. It’s definitely not a poppy, happy place. It’s more of a metaly place. But at the same time, the singing stays almost saccharine.”

In the end you get this meaty banger. The true proof of the tune’s power is the Spanish-language version of the ad, in which the meter gets tangled in the translation but the catchiness endures. Plus, how many jingles get their own extended dance mixes? Fair warning, press play on this vid and you’ll hear this in your head all damn day, like a catchy demonic possession.

No matter what corporate says, somewhere at Subway HQ this plays and they are still dancing, the sandwich artists grinning hideously over their hollowed loaves of Italian herb and cheese. Towering over them all is Dos Equis’ Most Interesting Man in the World, and he is naked and dancing, his fascinating boots lively and quick and in doubletime as he bows towards the roast beef like an enormous infant. He never sleeps, the meme. He says that he will never die.