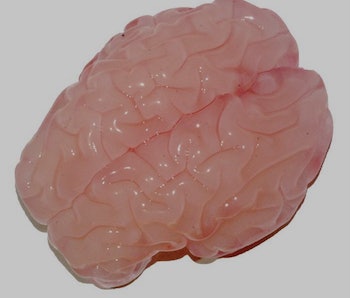 To keep our bodies cranking on a Tuesday, the brain needs space for its signal-sending neurons to build their networks. Unfortunately, our skulls don’t give it much room to work with, so evolution had to maximize space another way: by folding. A new video, released Monday with a study in Nature Physics, attempts to model how the brain forms these convolutions in the growing fetus.

For an organ that depends on maximizing connections between its cells, optimizing surface area — through folding — is key. This is why the brain resembles a brick of ramen noodles and not a brick.

In the Nature Physics study, the authors used MRI brain scans to 3D-print a layered gel model of the developing smooth brain in the fetus, which is when most brain folding occurs.

Dropping the model into a solvent, they observed the outer shell and core expanding relative to each other, mimicking the growth of the cortex — the brain’s outer layer — in the fetal brain.

The rapid expansion of the cortex leads to compression, which in turn leads to the formation of the sulci — the deeper, major grooves in the cortex — and the gyri — smaller, more intricate convolutions. In a similar 2014 study in the Proceedings of the National Academy of Sciences, researchers determined that the development of the brain’s wrinkles can be mathematically modeled on two simple geometrical parameters: gray matter growth rate and thickness.

This explanation puts other, more complex theories to rest. One suggests that specific regions of the cortex grow more than others; another predicts that groups of neurons in the cortex get pulled together by axon “anchors” in the white matter deeper in the brain.

But as far as the most recent evidence goes, it appears that evolution favored a simpler explanation: The brain simply crumples up because it grows too quickly in a small space.

More like this
Science
8.6.2022 5:00 PM
Earth is spinning too fast — the consequences for timekeeping may be unprecedented
By Andrew Moseman
Science
7.27.2022 6:15 PM
Look! This distant galaxy hosted the most powerful explosion since the Big Bang
By Kiona Smith
Science
8.4.2022 6:15 PM
3D analysis reveals a key similarity between dinosaur and bird embryos
By Charles Q. Choi
Related Tags
Share: