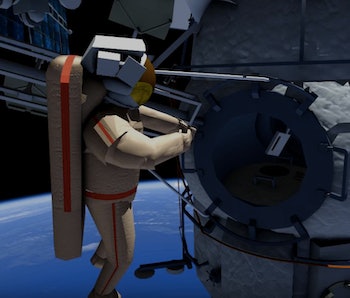 Think you’re having a hard day at work? You’re not. NASA just released an animation of what Yuri Malenchenko and Sergey Volkov must accomplish on Wednesday morning, and it looks like a piece of cake. So long as your piece of cake takes an exceptionally long time to make — 5.5 hours — and must be eaten in zero gravity under life-or-death circumstances using a daunting array of complex utensils. So in other words, a spacewalk.

NASA says that the pair will install “hardware and science experiments” and will also “photograph the external condition of the space station.” In the animation accompanying the spacewalk preview released today, the cosmonauts simply reappear at each subsequent stop on the mission, which would be great for them.

But, having seen space movies before, let me tell you: it’s going to be terrifying, and these two if-you-will juggernauts will be pumped with adrenaline, sweating, and possibly praying. (Either that or I’m projecting, and they’ll be calm and collected, stoically completing an incomprehensibly difficult task in outer fucking space.)

They’ll be quote-unquote translating all around the International Space Station — a verb which has nothing to do with Malenchenko and Volkov’s Russian-ness, but rather implies movement.

And the ISS is sizable: it’s bigger than both a Boeing 747 and a football field.

Malenchenko and Volkov are called “Flight Engineers,” which is perhaps the most unflattering and unjust job title in existence. They’ve been preparing for this spacewalk, or EVA (Extravehicular Activity) 46, for quite some time, and all their preparations will hopefully come to fruition on Wednesday morning at 8:10 a.m. Eastern time.

Their specific duties, per NASA:

to deploy and retrieve several experiment packages on the Zvezda and Poisk modules and install devices called gap spanners, which will be placed on the hull of the station to facilitate the movement of crew members on future spacewalks.

to install the Vinoslivost experiment, which will test the effects of the space environment on various structural material samples, and test a device called the Restavratsiya experiment, which could be used to glue special coatings to external surfaces of the station’s Russian segment.

to retrieve the EXPOSE-R Experiment, a collection of biological and biochemical samples placed in the harsh environment of space. The EXPOSE program is part of ESA’s (European Space Agency) research into astrobiology, or the study of the origin, evolution and distribution of life in the universe.

You can watch the Malenchenko and Volkov spacewalk live, Wednesday morning, on NASA Television.