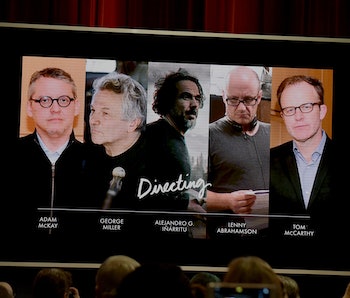 The Hollywood Reporter caught up with this year’s Best Director nominees — Alejandro G. Iñárritu, Lenny Abrahamson, Tom McCarthy, Adam McKay, and George Miller — to ask about the glaring lack of diversity in the 2016 Oscar nominees.

It allows something of value to be gleaned from these normally trivial Oscar season roundtables, though each did his best to sort of deflect the issue.

Here’s the important points that each had to say:

“It’s part of a much bigger problem across the whole culture. It’s a problem that, for me, as an outsider [he’s Irish] can only be addressed if there is real political will to change fundamentally how things work in the U.S., in access to education, in the legal system, in how wealth is distributed. There needs to be a serious commitment to a fairer, more inclusive society.”

“I think the problem is beyond Hollywood. It’s a problem of the culture in general, and this has to be discussed in depth and with kindness. African-Americans, Native Americans, Latin Americans, Asian-Americans, women, [members of the] LGBT [community] and people with disabilities, et cetera, all these minorities [make up] the unique social fabric of the U.S., and it is in there where the greatness and power of this country is.”

“It’s something that we all collectively have to ask ourselves: ‘What is my part in this — as a writer, director or actor? What can I do?’ If we all do that, if we all own it on all sides of the issue and don’t point fingers, but rather say, ‘What can we do to change things?’ — then we will.”

“We started the company Gloria Sanchez to develop female writers and directors. We didn’t do it out of some sense of altruism. We did it because we felt it was an untapped source of talent. The same thing would apply to minorities and voices from all around the world. Film is the storytelling narrative for all people.”

“I think the solutions, like most world solutions, are long-term and multifactorial. This being the biggest story of the Oscars — the fact that everyone’s alerted to it — is a good thing.”

Each tried their best to be in the inopportune position to generally answer the question, and they’re basically right that they can’t really change anything on an individual level, except for maybe McKay, who runs his own production company and appears to be trying to develop a wider range of stories, and Iñárritu, who at least hired performers of color when making The Revenant.

Still, the point here is that more diversity needs to happen, and the only way it’ll happen is because of wider overhauls. The hope is that the recent changes enacted by the Academy of Motion Picture Arts and Sciences will help things get more diverse from the top down.

More like this
Innovation
6.27.2022 9:28 PM
The 6 best MacBook Pro stands
By Vanessa Spilios
Culture
2 hours ago
Stranger Things Season 5 theory hints at a new superhero ally for Eleven
By Mónica Marie Zorrilla
Culture
7.6.2022 11:00 AM
64 years ago, Hollywood made the most rip-roaring Viking movie ever
By Emil Stern
Related Tags
Share: