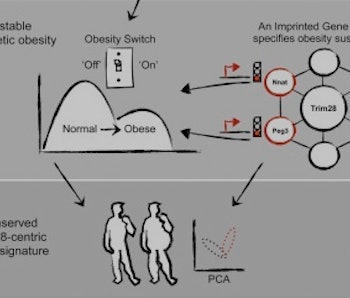 The many similarities found between identical twins can end with weight problems, as a mechanism that triggers obesity may explain why one twin can be much heavier than the other, a recent study says.

Reasons why identical twins can have non-identical weights may lie in gene activity, when molecules attach to DNA, causing sets of genes to activate or remain inactive.

Known as epigenetic modifications, such occurrences can be inherited between generations. Physiologist J. Andrew Pospisilik of the Max Planck Institute of Immunobiology and Epigenetics in Freiburg, Germany, working with colleagues, noted unexpected weight gain in some mice — and mice turn out to have only a single copy of a gene called Trim28 — most of which were either quite heavy or especially lean, with only a few average in weight. As it turns out, Trim28 controls other genes — making it an epigenetic modifier.

However, humans normally have two copies of the Trim28 gene, which should increase efficacy — yet in fat samples taken by the researchers from overweight children, Trim28 activity still tested as unusually low. Further research took into account twins who greatly differ in weight — and once again, the heavier child suffered from reduced Trim28 activity. The Max Planck researchers posted an article about their findings titled “Trim28 Haploinsufficiency Triggers Bi-stable Epigenetic Obesity”, and co-author Pospisilik spoke to Science Thursday, saying, “There’s a subset of children who look very much like the obese mice…We show that you can have a strong phenotype [obesity] with absolutely no genetic underpinnings.”

Unfortunately, the study has yet to ascertain what triggers or impedes Trim28, which, if discovered, could possibly lead toward a working chance of prevention.

More like this
Science
Jan. 21, 2023
Tripledemic: How viruses may outcompete each other
By Amber Dance and Knowable Magazine
Gaming
Jan. 24, 2023
Fortnite is about to get a Wild Dreams concert from The Kid LAROI
By Jess Reyes
Science
22 hours ago
An Upcoming Mission to the Dark Side of the Moon Could Radically Reshape Astronomy
By PAUL M. SUTTER and Universe Today
LEARN SOMETHING NEW EVERY DAY.
Share: