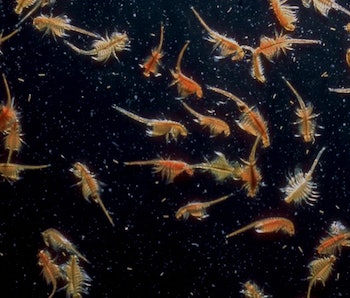 Brine shrimp are able to live for thousands of years and survive several extremes that would easily kill a human, and it’s possible that science is finally on to their indestructible ways, BBC Earth recently reported.

Able to survive incineration, severe dehydration, toxic exposures, starvation of oxygen, freezing, boiling, total lack of atmosphere, and irradiation, Artemia salina — better known as brine shrimp (or “sea monkeys”), are aquatic crustaceans that live in inland bodies of water that feature high salt content, existing in situations where salinity concentrations approach as much as 50-percent. Dating back 100 million years, A. salina are approximately a half-inch long, swim limbs-up, reproduce asexually at times, and eat by filter-feeding on algae.

Clearly the creature is hardy, but there’s more: if the waters in which the brine shrimp live dry out, the animals — which normally lay eggs — respond by instead creating “cysts” that hold nearly adult larva. The cysts can enter a state of almost complete desiccation known as anhydrobiosis. The introduction of water will bring the cysts to hatch into normal progeny.

How tough are A. salina? Oil exploration crews working the Great Salt Lake back in the 1990s accidentally brought up a mat of cysts carbon dated to 10,000 years old — and when exposed to water, a few actually hatched. It’s the ability to cope with such severe dehydration that may be the shrimp’s secret to success.

In humans and most animals, losing water is dangerous — as cells lose water, structure breaks down and the genetic materials and energy components of cells follow suit — but A. salina beats this death sentence by filling its cells with solid sugar.

Shrimp cysts are created in possession of a full load of a sugar called trehalose, and in cases of dehydration, the trehalose fills in cells, supporting membranes and proteins, maintaining cellular structure. As it turns out, other animals known for surviving in suspended animation — like certain worms and tardigrades — also employ trehalose to do the same job.

The loss of water is actually beneficial — freeze water and it can form puncturing crystals, heat water, and it expands — and radiation can activate chemically toxic reactions. The dehydrated sea monkey cysts aren’t threatened by any of those possibilities.

So can understanding the might of these minute beasts enhance human life? A 2009 research study presented a definite “maybe” as it revealed freeze-drying cells could preserve “DNA integrity,” and trehalose was one of the chemicals that helped in the success, showing that the certain sugar could possibly one day help protect human cells — making those sea monkeys suddenly seem somewhat more than just a pet for kids — although they sure do look like fun: