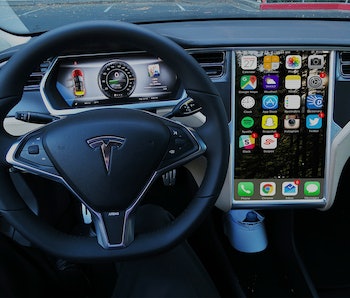 During a brief Q&A session on Tuesday in Hong Kong, everybody’s favorite futurist — Elon Musk, of course — dropped a little nugget of gold: We soon won’t have to deal with the foreign and often unintuitive app systems we find in cars. Gone are the days of ugly interfaces and anxiety-inducing user experiences of many of today’s middle-of-the-road vehicles.

Musk hopes his Tesla cars will be able to project your phone’s apps onto the center display console. Imagine: You’ll be lounging on your way to work in (what was once considered) the driver’s seat, cruising on autopilot, perhaps shaving — and, as if that weren’t cool enough, you’ll also be able to have all your apps on a larger screen. Both Android and iPhone.

As we’ve sort of thought about it more, the logical thing to do from an app standpoint is to, maybe, allow apps on your iPhone or Android to project onto the center display. As opposed to trying to create a new app ecosystem. So, that’s probably going to be our focus in the future — enabling you to project apps from your phone onto the center screen. I think that seems like the logical move.

This should come as welcome news to anyone who’s spent a good five ten minutes at the start of any vacation, messing with the sometimes confusing app interface in a new rental car.

More like this
Innovation
5.16.2022 9:00 PM
Boeing’s Starliner spacecraft takes another shot at the International Space Station
By Claire Cameron
Science
5.22.2022 1:00 PM
10 years ago, one SpaceX launch showed NASA they could work with Elon Musk
By Allie Hutchison
Innovation
5.24.2022 1:33 PM
50 years ago, the U.S. and U.S.S.R. joined forces to ensure astronauts could survive in space
By Allie Hutchison
Related Tags
Share: