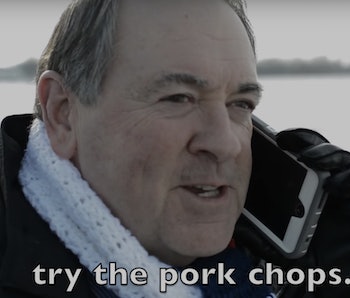 While watching Republican presidential candidate Mike Huckabee’s Adele-inspired campaign ad, one can trust that a few phases of absorption will occur. Though the viewer experience varies from person to person, you can at some point expect feelings of amusement followed by benumbing confusion.

The ad runs a little over three minutes and features the former Arkansas governor and 2016 Republican presidential candidate navigating his way through a montage of Midwestern counties as a modified cover of Adele’s “Hello” narrates his journey to Iowa. As the seconds begin to breeze by, the lyrics become downright hilarious, “Hello from the caucus night/if Bernie wins I’m gonna die.”

To put it bluntly, this video is some pretty out-there shit for a presidential candidate, but how does Adele feel about all this? The latest move in a campaign that has flatlined in the eyes of most Americans leaves viewers to wonder if a man with a case of the screw-its is most effective when he’s got absolutely nothing to lose.