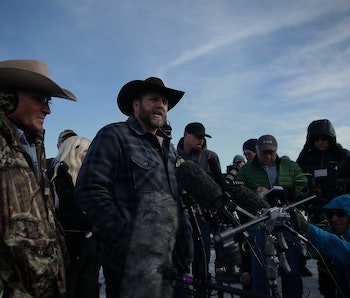 It was a traffic stop that ended the latest stand-off between an anti-government militia and law enforcement.

Authorities pulled over two vehicles on Tuesday afternoon along Highway 395 in rural Oregon. What happened next is unclear, but there were shots fired. By the end of the day, militia leader Ammon Bundy and seven others were being held by authorities, and group spokesman LaVoy Finicum had been killed.

There’s no official word on who fired first, but gunshots between the FBI and Oregon State Police and members of the group were fired — resulting in injury to Ryan Bundy and the death of Finicum. Ammon Bundy was reportedly scheduled to speak at a community meeting in John Day, Oregon, roughly 70 miles from Burns.

The group had taken to calling itself the Citizens for Constitutional Freedom and started occupying the Malheur National Wildlife Refuge on January 2, camping out in the visitor’s center, which looks like a log cabin you’d see at Disneyland. The group occupied the refuge for a variety of reasons, the first being a protest of the jail sentences given to two ranchers who started fires that spread to federal land and were hit with arson convictions (the ranchers have denied any support of or affiliation with the group.)

For about three weeks, authorities didn’t attempt an armed overthrow of the occupation, fearing perhaps the outcome of Waco, Texas in 1993, when 76 people died after a siege of a compound being occupied by a religious group.

Finicum had previously said he would rather be killed than arrested, telling NBC News on January 6, “I have no intention of spending any of my days in a concrete box … there are things more important than your life, and freedom is one of them. I’m prepared to defend freedom.”

As of Tuesday night, a number of protestors continue to occupy the refuge. Early in the occupation, Ammon Bundy explained he was prepared to remain “for years.”

Eight individuals involved with the incident at Malheur National were arrested Tuesday — five at the traffic stop, two in Burns, Oregon, and one in Arizona. The Bundy brothers were among those arrested at the traffic stop, in addition to collaborators Shawna Cox, 59, of Kanab, Utah, Brian Cavalier, 44, of Bunkerville, Nevada, and Ryan Waylen Payne, 32, of Anaconda, Montana.

The pair arrested in Burns were Peter Santilli, 50, of Cincinnati, Ohio and Joseph Donald O’Shaughnessy, 45, of Cottonwood, Arizona; John Eric Ritzheimer, 32, of San Diego was the protester arrested in Arizona, after turning himself in to police.

The eight arrested people face a federal charge of conspiracy to impede or injure officers.

Cliven Bundy, father of Ryan and Ammon Bundy, was involved in a 2014 standoff against the federal government over unpaid grazing fees on federally owned land in Nevada. The Bundy family ranch responded to the death of Finicum via Facebook Tuesday:

More like this
Mind and Body
22 minutes ago
How to spot a liar using a classic mathematical trick
By Dorje C Brody and The Conversation
Mind and Body
6.30.2022 11:00 AM
Male birth control is at our fingertips. Will we ever grasp it?
By Elana Spivack
Mind and Body
6.29.2022 6:30 PM
How music makes you feel may depend less on your brain than scientists once thought — study
By Allison Parshall
Share: