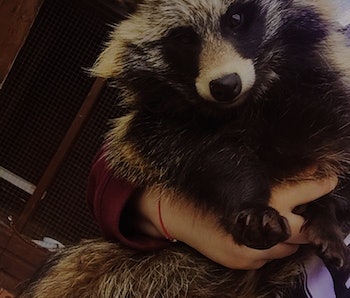 This Japanese tanuki dog is currently enjoying a day in the cyber-sun as photos taken by his owner have become buzzworthy along social channels.

His name is Tanu, and his breed are wild animals informally known as “raccoon dogs” — his owner found him abandoned and gave him a home.

Native to East Asia, tanuki (Nyctereutes procyonoides) are true canines, despite their bandit eye markings and overall look. If its appearance offers any meaning in relation to its origin, it actually reflects on the beginnings of pooches, as the raccoon dog looks much like ancestral dogs that lived millions of years ago. Furthermore, wild Tanuki hibernate — another primitive behavior — making these dogs the only current pups that do such a thing.

However, perhaps the most talked about tanuki-related subject are its testicles. The animal is noted for its large “package” — and as it has long been imagined as a being with magical powers, the amount of art to be found that concern the animal’s testes is impressive — with illustrations and representations of its male genitals often oversized on purpose, ranging in age from modern anime to ancient scrolls.

In the end, cute or not, tanuki are feral beasts, so it’s probably best to enjoy them via Twitter than in your apartment.