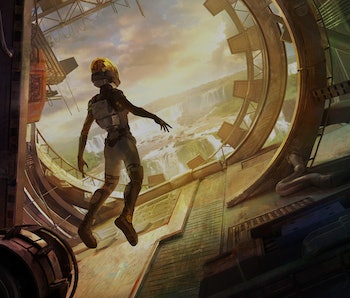 If space permanence is within our reach, then so are space settlements, and, it follows, space evolution. European Space Agency chief Johann-Dietrich Woerner is already planning to build a “moon village” — a permanent lunar base — which sounds crazy but is actually feasible. Here on Earth, Homo sapiens has spent the past 200,000 years evolving under gravity’s downward spell. Up there, where our space-faring descendants will roam, things are light.

Our bodies developed to withstand 15 pounds of pressure per square inch at sea level. Keeping ourselves upright under these conditions is no simple feat, which is probably why our bones are so dense (by one estimate, 3.39 grams per square centimeter) and why our skeletal muscle mass makes up about 35 percent of our body weight. Compared to pressure conditions in space, Earth is basically swamp muck — wading through it requires force.

Future space dwellers won’t have to deal with the terrestrial mire — in fact, carrying around so much bone and muscle weight might be too energetically costly to be favorable. Broadly speaking, individuals that can do more things with less energy — say, harvesting Martian potatoes or slaying lunar invaders — have a selective advantage over their less efficient kin. This advantage means they’re more likely to live long enough to reproduce. In space (as on Earth), shedding extra weight should give you an evolutionary step up.

Portland State University anthropologist Cameron Smith agrees: He predicts that future denizens of Mars are likely to have a “lither, lighter build” than we currently do because they’d have to deal with only two-thirds of Earth’s gravity.

Along with our stature, our insides are likely to change, too. In his 300 days on the International Space Station, NASA astronaut Scott Kelly has adapted to zero-gravity conditions in unexpected ways. In an AMA with Reddit last week, he revealed that astronauts generally have lower blood pressure in space, which isn’t immediately obvious but makes a lot of sense: With less external pressure on the body, and less gravity to fight, the heart doesn’t have to work as hard to move blood around. That’s good news for current humans — enough of us are already suffering from hypertension — so we’d probably be able to get by with weaker hearts. In time, evolution would probably select for people with less vigorously (and therefore more energy-efficient) pumping hearts.

Kelly also pointed out that living in zero gravity has caused the callouses on his soles to fall off. When you’re floating in space, there’s not exactly any pavement to pound; instead, the tops of Kelly’s feet have become tough and scaly, like “alligator skin,” because they scrape along footrails when he changes direction. If this is how we’re going to get around, evolution might favor individuals with particularly dexterous feet.

But let’s not forget that the cycle of evolution requires individuals to survive long enough to pass on their genes. Even if your future space granddaughter has an overzealous heart that uses way too much energy, or was born heavyset with stubby feet, super-modern medicine will likely have progressed to the point where extending her life long enough for her to pop out a couple of babies won’t be a problem. Darwinian evolution, some argue, has essentially ceased because we can so extend our lifespans, making it possible for people with less favorable genes to pass them on anyway.

If we end up breeding in space, the chances are good we’ll be carrying our earthly genetic baggage with us.

More like this
Science
19 hours ago
NASA is set to make the nearest flyby Jupiter's most habitable moon in 22 years
By Kiona Smith
Science
4 hours ago
Artemis I: A fire at NASA Kennedy gives the long-delayed Moon mission its latest twist
By Doris Elín Urrutia
Science
39 minutes ago
WHAM! 10 jaw-dropping images capture NASA DART slamming into an asteroid
By Jennifer Walter
Related Tags
Share: