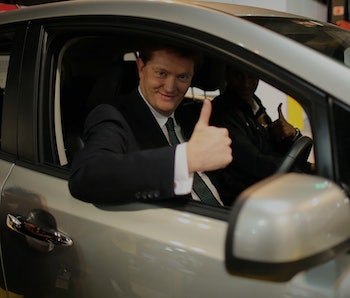 When a computer handed control of a Nissan Leaf to a human, the living driver faltered and crashed the Leaf into an unoccupied Prius, reports the Wall Street Journal. The report of the January 8 accident, which took place in San Francisco, is light on details of why fenders bent. But the WSJ raises the specter of the idea that the transfer — that awkward space where for few seconds who can say, really, if man or machine ruled the car’s destiny — could have contributed to the collision.

If so, this highlights a core problem of systems that switch between autopilot and human guidance. Google engineers, aware that the most fraught moment of a relay race is the baton handoff, have attempted to obviate the issue by going full-blown computer (save for a panic button to be deployed in times of great concern). But the technology that enables fully autonomous cars is likely to outpace the ideas we have about human liability and rules of the road. In the meantime, will we see more collisions when autopilots abandon their drivers and force people and/or Jesus to take the wheel?

One answer to that question is recognizing there is a third path: Rather than full autonomy or a binary flesh-and-bot system, it’s creating a dynamic where control flows to or from the driver in any given scenario. It’s what Massachusetts Institute of Technology’s David Mindell calls a “perfect 5.”

If you can imagine that a computer-controlled car could range on a scale from 0 (your Model Ts, say) to 10 (all autonomy, baby, all the time) the perfect 5 plants its flag right in the middle. What makes the system “perfect” is that it’s not inflexible. It’s not even half-human, half-not. It’s that the driver takes or cedes control as traffic conditions allow. You could envision, hypothetically, that this might look like letting the computer take you through a dark desert highway, so you can focus on the cool wind in your hair, but you would dictate where you wanted the car to park when you pulled into the hotel.

What might a perfect 5 handoff look like? Something that’s not a switch but a dial. Perhaps the shift works in a way that for the first few moments, the human thinks he or she is in control — but, like an elevator close button that’s really just there to appease your reptile brain. The computer could adjust the brakes with the gentle touch of an algorithmic driving instructor, sneering condescension optional.