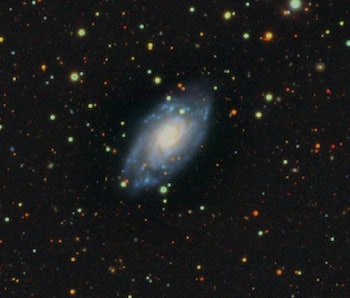 The Sky Viewer tool, which is sort of like Google Earth except that it lets you pan across a large swath of the universe, just got an upgrade. Using images from the Dark Energy Camera Legacy Survey, or DECaLS, at the Department of Energy’s Lawrence Berkeley National Laboratory, the map aims to encompass a third of the sky.

University of Toronto astronomer Dustin Lang built the Sky Viewer so that if you see something intriguing, you can zoom in on it:

You can check out all millions and millions of heavenly bodies at legacysurvey.org/viewer and if you want to be more productive than just whimsically panning the night sky, head to Galaxy Zoo. There, citizen scientists (like you!) can help physicists by categorizing galaxies that, by and large, have never been seen by another human.