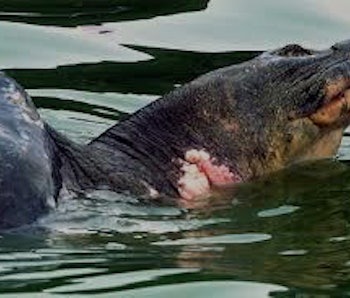 Grief is a still lake in Vietnam. In this case, it’s a lake in central Hanoi, where the body of a revered, 440-pound sacred turtle was discovered Tuesday, prompting an outpouring of mourning.

Thought to be older than 80 years old, the creature named Cu Rua was one of only four Yangtze giant softshells known in existence. Of the three remaining, one lives in another lake in Hanoi and two reside in a Chinese zoo. But none held the significance of Cu Rua, who was a symbol of the country’s struggle for independence and part of a national fable taught in schools about a reptile who gives a magic sword to 15th-century warrior Le Loi to defend the country.

The species is rarely seen, and appearances are considered signs of good fortune. Since the death came on the eve of the Communist party gathering for congress Thursday, many are considering this a bad omen for the ruling class.

“It was clearly an ancient animal, I would say easily over 100 years old, and so its death does not come as any real great surprise.”

Government officials are considering embalming the turtle so it can be displayed. Into grief we go, but not despair.