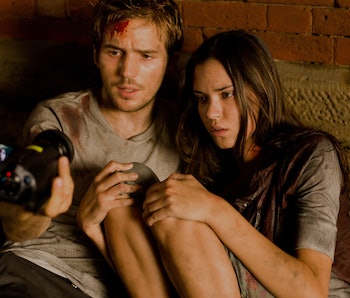 Humbly assembled, 2008’s Cloverfield far exceeded the sum of its parts. With a relatively limited budget of $25M (as opposed to the $160M of the latest 2014 Godzilla), producer J.J. Abrams made the most of the limited playground he could afford. The resulting movie surprised audiences and critics with its execution rather than the originality of its setup.

Gone were the international crisis rooms and rotating 3D schematics of the monster in question — instead, viewers were locked at ground level following the struggles of protagonists who could have so easily been a mere set of extras. This amount of withholding was enough to generate endless online conversations, theories, and self-mythologizing on the part of fans, tapping into that nerd pleasure zone where fans get to hypothesize as much as the creator.

That is not to say the movie was perfect; between an improbably attractive CW cast remaining improbably attractive throughout their harrowing ordeal, and the inexplicable narrative choice not to have the T.J. Miller character slaughtered by his friends for his insistence on filming their escape from a crumbling city because reasons, the movie definitely benefited from the novelty of being on the early end of the found footage trend.

Still, the original Cloverfield was an unquestionable trendsetter and its non-sequel looks to continue the legacy by also offering us an unexpected take on a familiar premise — which is fairly unique of the Sci-Fi thriller genre these days.

Where Cloverfield particularly excelled was in its ability to execute claustrophobia against the backdrop of large-scale stakes. While so many films and TV shows focus on the exposition, the high concept itself, Cloverfield is a name that is instead associated with the appeal of the unknown and the unseen. This sequel, sorry, “blood relative,” looks ready to continue the tradition, this time exploring the trust/mistrust between two people rather than the bond shared by the original’s cohort.

While much is still unknown about the film at this point, it is clear from the trailer that the sprawling expense of Manhattan’s skyscrapers will give way to a single cellar — located at 10 Cloverfield Lane, natch — for a sizeable portion of the film. The plot finds Mary Elizabeth Winstead’s character stranded in what she believes to be a hazardous, post-nuclear world and under the unrequested protection of John Goodman. From the premise alone, it is safe to say that a stronger emphasis will be placed on characters this time around and frankly, we can’t think of anything more terrifying than John Goodman keeping us in a cellar for our own good either.