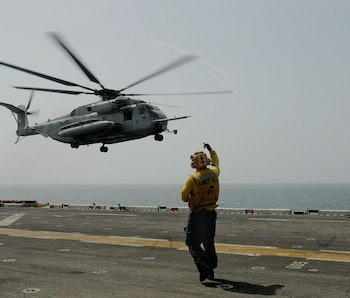 The Coast Guard-led search and rescue operation for the 12 marines has been underway since midnight. They have uncovered fire, debris, and an empty life raft about two and a half miles north of Oahu, though no survivors have been found as of 8 a.m. Eastern.

The 12 marines were engaged in a training exercise at the time of the crash, though no information is currently available on the cause of the collision.

Rescue attempts will have to contend with some of the most significant ocean swells of the season on Friday. Some are forecasting waves as high as 40 feet.

Check back here for updates as details become known

More like this
Science
Sep. 13, 2022
NASA sets a new tentative launch date for its Artemis I rocket after setbacks
By Doris Elín Urrutia
Culture
Sep. 24, 2022
These home upgrades are so cheap & impactful, Amazon can barely keep them in stock
By Christina X. Wood
Entertainment
15 hours ago
The MCU’s Ironheart will improve on the comics in one pivotal way
By Richard Newby
Share: