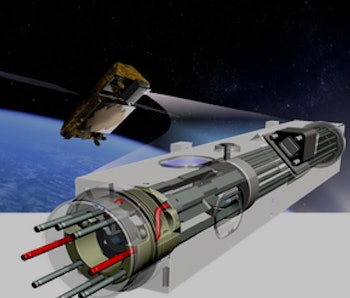 NASA’s Jet Propulsion Laboratory (JPL) held an online press conference on Thursday to explain and discuss DSAC—the Deep Space Atomic Clock project—technology that is intended to utilize the precision of an atomic clock to free deep-space explorer crafts from having to rely on conversational signals with Earth antennas for tracking purposes.

Currently, deep-space exploration missions rely on frequencies sent and received to determine positioning—and to connect with earthborn signals, those spacelabs must converse with one of three terrestrial antenna dishes (Deep Space Network or DSN stations) to determine and maintain trajectory. Placed across the world (in Australia, Spain and California), only one dish is available to communicate at a time—and with only one spacecraft at a time—leaving others waiting several hours to connect, meaning that by the time the antenna is open to send feed in response to what’s been received, the satellite has already changed position, forcing further adjustment.

However, if crafts had their own onboard, accurate clocks, there would be no need to check in with Earth-based receivers to check coordinates—giving the exploring devices the ability to make autonomous course corrections and even land with high precision—and furthermore, although only one DSN is available at a given time, the freedom from broadcasting allows for data reception from multiple crafts at a time.

Traveling accurately through deep space is an intricate venture. On Earth we can use latitude and longitude—but a spacecraft must use the positioning of the sun and the trajectory of a destination planet, moon, or other terminus (as all are moving in space). Having an onboard clock would help the crafts work out their own routes—measuring time to formulate positioning—and those timers must be incredibly precise, and able to resist deformation of time-keeping due to any anomalies that might affect a clock (gravity, the curvature of space, solar energy, among others).

The Deep Space Atomic Clock (DSAC)—using ionized mercury atoms for accuracy—is expected to be able to provide disruption-resistance and accurate time keeping. Atomic clocks tend to be large contraptions, but the DSAC is space-portable—about the size of a common kitchen toaster—and the JPL is ready to place a DSAC in space to test its ability to maintain time accuracy.

The JPL announced Thursday that the DSAC test is scheduled to go into low orbit September 2016, on a five-month mission that—if successful—could not only lead to future deep-space missions equipped with DSACs, but the upgrading of Earth-orbiting GPS satellite clocks, increasing efficiency for GPS as well.

More like this
Science
8.12.2022 10:00 AM
45 years ago, the first Space Shuttle made history without going to space
By Allie Hutchison
Science
3 hours ago
Artemis SLS on the launchpad and more: Understand the world through 7 images
By Robin Bea
Science
20 hours ago
Behold! NASA’s Artemis I is on the launch pad, ready for the Moon
By Allison Parshall
Related Tags
Share: