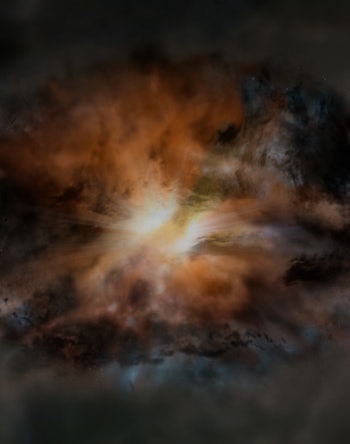 When astronomers are observing objects that are great distances away — like on a scale of billions of light-years — they are essentially looking in the past. So when scientists are talking about galaxy 12.4 billion light-years away, they’re describing a scene that’s unfolding back in time, at a point where the universe was a tenth of its current age.

That’s pretty impressive by itself. Then we add on another layer of awesome-sauce with the fact that that galaxy — the quasar W2246-0526 — is the brightest galaxy in the known universe.

Then we up the ante with even bigger news: Scientists have just found this quasar is so turbulent that it’s in the process of vomiting its entire supply of star-forming gas.

That’s the story behind a new study published today in Astrophysical Journal Letters. Researchers using the Atacama Large Millimeter/submillimeter Array (ALMA) in Chile have found out that the galaxy is “so chaotic that it is ripping itself apart,” lead study author Tanio Díaz-Santos of the Universidad Diego Portales in Santiago, Chile said in a news release.

Quasars are defined by the very active supermassive black holes sitting at their centers, capable of spewing high-energy jets of particles and radiation. Almost all of them shine brightly, but a rare kind — one out of every 3,000 observed by NASA’s Wide-field Infrared Survey Explorer — are called Hot, Dust-Obscured Galaxies, or Hot DOGs.

W2246-0526 is such a Hot DOG. And it currently holds the distinction as the most luminous galaxy ever found.

It turns out the reason it’s so bright has to do with how dynamic and turbulent it is. W2246-0526’s interstellar is moving at such high speed that it’s blasting out the combined force of basically 350 trillion suns in hot gas and light .

At the supermassive black hole in the middle, hot gas becomes superheated and the light from the accretion disk of the Hot DOG can’t escape — instead it’s absorbed by a thick shroud of dust and reemitted as infrared radiation.

This infrared radiation doesn’t just go quietly into the night. Its emission at this very local region is so intense — making the quasar’s center about 100 times more luminous than the rest of the galaxy combined — that it pounds the rest of the galaxy with a brutal amount of force and makes the rest of W2246-0526 feel like an interstellar version of a typhoon. Interstellar material is being tossed out at a rate of 310 to 373 miles per second.

The scientists theorize that if this turbulence continues, all of the quasar’s gas would basically be boiled away in all directions.

In other words, the brightest galaxy in the world has its days numbered. I guess nothing gold really can stay?