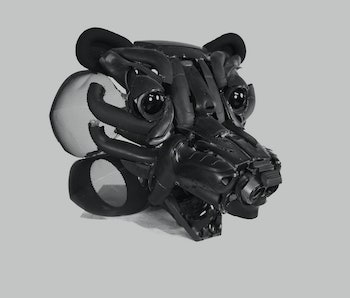 Tim Hobbelman is an artist who lives in the Netherlands. Specifically, he lives in Waalwijk, in a commune for what he described as “people who love living together” before excusing himself for a group dinner (each night, one of the fourteen members cooks.). “I love to see it as a small society where one can make a difference,” he says. “It’s harder on the outside.” But it mustn’t be that hard. He’s a big deal on the outside — and for good reason. His captivating sculptures, made from used electronics, are attracting a growing audience. His next show will be in Eindhoven, in the Netherlands, during a “Gewoon Fucking Raggen event.”

Inverse chatted with Hobbelman about his futuristic animals and insects, artworks that he’s calling Animaux.

Can you tell me a bit about yourself? Where did you grow up? Where do you live now?

I grew up in a small town in Waalwijk, moved a couple of times with my mum and brother and after that drifted off to live my own life. Currently, I’m living in Tilburg, a city in the south of the Netherlands. I’m 29 years old.

I studied Interior Design at Sint Lucas in Boxtel (the Netherlands) and Architecture in Lincoln (UK). I’ve worked for both architects and designers, including Claudio Silvestrin as an intern.

I’ve got a fantastic brother (27) and lost my parents to cancer fourteen and four years ago. Which was a psychological wrecking ball.

I’ve been having some major problems with the loss and taking responsibility for my own life. The death of my parents resulted in an addiction to smoking weed and ended with some time in a homeless shelter. After that — after hitting rock bottom — I slowly regained responsibility, took therapy, quit smoking ganja (for more than a year now), started to focus on my Animaux, and found the love for life again. Now, I enjoy every day.

I’m very sorry to hear that. Good on you for getting your life back on track. Do you find sculpture therapeutic, then?

In a way, yes. But, more than therapeutic, it’s liberating. It’s making my hands and mind work together. Whereas before (working in architecture and interior), it was always one of the two. Working with my hands without thinking, or thinking without building.

It’s liberating to know that all that I’ve learned in the past ten years comes to life in my sculptures. Composition, minimalism (which I love), a vision behind the animals, a greater picture (regarding recycling and e-waste).

As a writer, I can technically relate: my hands and mind are working together, in that my hands are the vehicle for my thoughts. In sculpture, I’m sure, the relationship is even more noticeable. So, you never studied sculpture? Is sculpture your hobby, passion, or job?

I never studied sculpture, no. Sculpturing is a hobby for now, sadly. It’s a passion as well, and I’d love for it to be a job. I’ll start a company this year so that I can sell them and gain exposure.

Take me through the creation of a sculpture. First, how do you choose your subject?

There are two ways. I have a whole bunch of electronic devices and some of them look like body parts of animals. They will define the animal in one way. A dustbuster can look like a bird’s chest. The inside of a shaving kit can look like a bird’s beak. The other method is to choose an animal that I’d love to build and then find the parts necessary to compose that animal.

It’s amusing to think of you eyeing the nearest electronic device and thinking only about dismantling it and repurposing it.

I sometimes wander in these massive stores full of new devices and wish I could take them home just to dismantle them.

Now, why discarded electronics? Do you have access to a trove of them? Was your reasoning behind the approach — using discarded electronics as your material — more ideological or convenient? In other words, do you think that the material gives the sculptures something they wouldn’t otherwise have, or is it just that you can get your hands on the materials and they function well as such?

Well, the start of making those animals was at a company called De Ontdekfabriek (the Discovery Factory), which was a place where I gave workshops to kids to teach them how to dismantle old devices and turn them into simple robots. After some time working there I started to see the beauty behind the function of a device. The design of a functional device like a shaving kit is phenomenal. Most people don’t see that.

While working with the kids I started to collect devices and compose simple animals from the parts. I learned more and more that the organic shape of those devices was almost animal-like. I even like to think that Philips gets inspired by the animal world. Looking back, it’s almost a match which was bound to happen someday. Turning animal-like parts into animals. So it’s not really been a choice, it just happened to me. Like lots of things in life.

At the start it was just convenient to use those materials, but along the road I learned more about the ideology. Working with companies like the E-Waste Race (Eindhoven), which promotes good recycling to kids. I learned about the results of bad recycling, the footprint those devices leave when they’re not recycled properly. In Holland, many people still throw their old devices in the waste bin.

For materials I go to second hand shops, and take the devices from their recycle bins. After taking them apart, I bring my well-sorted leftovers to a recycling depot.

An adaptive approach. I’m sure I’m not unique in that I have a closet shelf full of old electronics. They’re basically worthless, far past their time. Maybe one day I’ll take your approach and craft something out of them. Or I’ll just send them to the Netherlands.

I’d be happy to adopt your devices.

Okay, so next phase of the process: Once you’ve chosen a subject — a goose, let’s say — do you try to stay fairly close to the animal’s actual anatomical proportions, etc., or is it more free-form than that?

After choosing the animal, I do a lot of research for size and proportions. Proportions are more important than size, because I can’t upscale the devices I’m using. I use photo references, the internet, and books to get my mind set on that particular anima. Then I start building.

That’s a nice observation. When I think of it, I try to get to the viewer’s empathy. That device I bought, used, and loved is now staring back at me after being thrown away. I try to keep most of the parts I find intact so people can recognize the device as part of the animal.

Don’t get me wrong: some of your creations I would not describe as intimidating. Some are verging on cute.

It’s also a major difference to see them in real life. I’ve seen them so many times, they don’t intimidate me anymore. (Think of people working with tigers for years and years.)

Good point. Hopefully one day I’ll have the pleasure of seeing them in person.

Can you talk a bit about where you’ve found inspiration? You’ve mentioned minimalism and architecture, and I’d be happy to hear you elaborate on those if you feel so inclined. But in addition, what else inspires you? For instance, are you a big fan of dystopian novels and movies or of sci-fi in general?

The inspiration comes from the devices themselves, and obviously from nature.

In the time I’ve been working on Animaux I found a couple of artists who make beautiful works, like JOH’. But I only use my intuition and experience to create.

Dystopian books like 1984 and Brave New World intrigue me but are not part of the process. While films like Mad Max and Waterworld are fantastic to look at, the only thing we share is turning trash into functional, beautiful things.

The minimalism in my work is all about the details. The first animals I made were roughly glued and composed. In later animals I found that I love the “less is more” approach, and that’s worked out perfect. The bear, for example, is composed out of 40 devices, whereas the duck is composed out of 10. It gives more peace to the viewer, more unity, it’s less intimidating.

Did you get started in sculpture making more traditional artworks, or was your start with the Animaux?

I always designed machines, installations and furniture. But Animaux is my first sculpture project.

Do you have any ambitions in sculpture beyond Animaux?

I’d love to make bigger Animaux. In the future, I plan to finish my wild boar, dragonfly, start on a dolphin, and three geese. But, first, I need to make some money with Animaux so I can invest that in making my next project: a lifeline harmonograph.