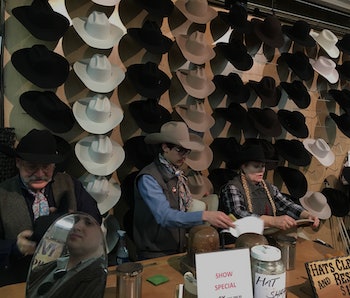 Everyone in Denver knows, when the Stock Show is in town, Bolo ties emerge as the de rigueur street style statement, downtown smells like a farm, and for some reason, the temperature automatically dives 10 degrees. The National Western Stock Show, which revolves around ceremonies during which people pin awards on cattle, includes rodeos, many cases of Coors, and a man-sized portion of history. This year marks its 110th anniversary and there still isn’t/will never be anything quite like it.

I grew up in Denver and we went to the Stock Show almost every year. But I never really knew what was happening all around me: a lot of cows and hay, sure, but why? The times I’ve gone since college have shed a little light on the mystery, but make no mistake: The St. Johns haven’t been farmers or ranchers for many generations and we probably weren’t very good at it when we did do it. I headed down to the kickoff parade as a Denver native, yes, but also as a city slicker who hasn’t ridden a horse in 20 years.

When I arrived, 17th Street was lined with everyone from kids in cowboy hats to lawyers in suits on their lunch break. Mayor Michael Hancock was decked in head-to-toe Denver Broncos gear and former Broncos kicker, Rich Karlis, who famously booted the ball with a bare foot, was the grand marshal (playoff season!)

The parade featured corporate sponsors, tractors, all manner of ladies on horseback, and a cover band from local honky-tonk the Grizzly Rose belting out “The Devil Went Down to Georgia.” But, the highlight was dozens of Texas steer stomping down a major city thoroughfare. It’s difficult to do justice in words to how jarring a visual this is — like some cowboy’s psychedelic, apocalyptic fantasy. It’s beautiful.

Afterward, a half dozen street sweepers closed the thing out, attempting to clean up the mess left behind. An hour later, downtown still smelled like shit.

One of the two historic, luxury hotels in Denver — the other is the Oxford — the B.P. is the de facto epicenter for the classier side of all things Stock Show. When I sauntered in after the parade, people were sporting cowboy hats at the traditional British afternoon tea and others had ducked into the Churchill Bar to smoke cigars, further browning their grey mustaches.

The Ship Tavern at the Brown might be the place to socialize during the Stock Show. It’s a bit pricey (for Denver, it ain’t the Plaza) but it’s also full of personality and a tad rugged. The story goes that the hotel — which has been in continuous operation since 1892 — had a former owner who gave his wife a gift of various model ships. Like many women, she promptly returned the items: She wasn’t too into their look, so they stashed them in the bar. Its nautical look has been on display since it opened just after Prohibition in 1934.

During the Stock Show, the joint is a mix of hotel guests, the well-heeled, and cowboys, dammit. Last year, my friends and I encountered a milliner from Santa Fe, New Mexico named J.D. Noble. He sells hats from the hundreds well into the thousands of dollars and recently outfitted the cast of The Hateful Eight, which was filming in nearby Telluride. He bought us a round with that sweet, sweet hat dough.

We had also found, to our surprise, that the Ship Tavern had — if I remember correctly and I probably don’t — three varieties of Pappy Van Winkle whiskey. It being rare and my friend, Chris, being a banker, we ordered a couple of glasses. When I walked into the Tavern this year and inquired about Pappy’s availability, one of my favorite bartenders, Charles, told me to inch in for a secret. Apparently someone had dropped one of the Brown Palace’s last bottles of the sought-after stuff. We did the math and, for what they were charging per pour, it was a $1,500 gaffe.

I asked Chris, who is from Ireland and visited Denver with his Canadian-born wife, Vasanti, what he thought of the whole deal. “Being newbies to the U.S., we were really curious to see the West of the United States,” he told me. “And not the diluted made-for-tourists West Coast, but the real West, with mountains and cowboys. And cows. And we got to see that. There were dudes in cowboy hats, crushing beers and rocking righteous mullets. But there were some unexpected sights: like the two ton cows getting their hair dried, or the cowboy/milliner/hot-sauce-maker who helped us polish off some Pappy in an old school hotel bar.”

The drink of choice at the National Western Stock Show, itself, is beer. You can take it all over — like some sort of Bonanza-fied Mardi Gras of the West. People get absolutely hammered at the Stock Show, which breaks down like this: There are the barns where show cattle and other animals are kept, an events center and coliseum for rodeos and the like, and an expo hall “trade show” where just about everything you’ve never thought of before is for sale.

Corporations like Chevy and John Deere have major displays, and there’s all manner of livestock equipment, Western furnishings, and a bevy of crap: As I turned one corner, I found dozens of people rapt with attention. They were focused on a woman giving a presentation — headset microphone and all — on the Easy Mop 360.

I loitered around the Nelson Horse Waterers stand for awhile and was greeted by an amicable, older fellow in a vest named Richard from Cedar Rapids, Iowa. He showed me the complicated, technologically-sound water basins, which have heaters for cold weather and refill automatically. I hadn’t ever even thought of how horses get water before, and here was an entire business based on that enterprise. It was just one distinctive illustration of how out of my element I was.

Down in the barns, that feeling is magnified. Cowboys kick up hay as they spit tobacco and groom cattle. It’s a family affair, kids gathered around hi-top tables playing Uno. You can tell there’s a lot of waiting around between judging — mostly by the rows of sleeping ranch hands. So, what’s at stake? I spoke with Morgan Penner from Lafayette, Colorado about her two entries — a relatively small amount. She pointed to the larger heifer and said that her breeding value would increase from “around five grand to 50 grand” if she won a prize in her age group. Penner — a diminutive, beautiful woman who could still no doubt kick my ass — has been coming to the Stock Show for 13 years. When I asked her how much the fair meant to her business, she nodded and said, “A whole lot.”

Walking the rows, all of the states you’d think would be represented are: These guys are from Texas, these ones from Oklahoma, and those from Nebraska. I wore cowboy boots and a rodeo snap shirt, but the real ranchers could smell the greenhorn. I meandered into the Cowboy Bar — which is more or less a room amongst the animals — and plunked down for a Coors. Most of the real McCoys were ordering beers with tomato juice — the party goes on late into the night for the whole run — while they took in the kickoff of the Kansas City-Houston playoff game. It’s not a terribly diverse crowd — many of the African-Americans I spotted were working the shoe shining booth upstairs — but I wouldn’t characterize the throng as backwards or hillbilly. Farmers and ranchers have a tough, scrappy job and the folks at the Stock Show are among the best in the business. None of it — from the attitudes to the get-ups — seems like posturing. Their way of life is as authentic as wearing a suit to a downtown office — maybe more so.

Jim Bates is one such character. I stumbled by the booth he was working for SEK Genetics out of Galesburg, Kansas, where I basically, bluntly, meekly asked, “Um, so what do you guys do?” Bates plotted it all out for me, from selling sperm to embryos (that’d be the heifers’ eggs). The company’s catalog lists hundreds of animals with stats that read like baseball cards. Bates explained to me much of the meaning behind the percentages and abbreviations: He was a real mensch about it but, boy, was I a fish out of water. I do know this: SEK can FedEx bull semen for as little as $20 to any part of the country, whether you’re in the ranching business or just happen to be a major creep.

Across the aging complex that Interstate 70 runs through — a new facility will be built over the course of the next decade — the Denver Coliseum, where rodeo events are held. The one I attended was billed as “Colorado vs. the World” and was, expectedly, a magnificently-shocking spectacle of the highest order.

If you’ve never been to a rodeo before: go. We’re talking bucking broncos, rodeo clowns, bull-riding, steer wrestling, and mutton busting. Don’t know what mutton busting is? It’s when parents allow their children to be fastened to a sheep for as long as they can handle it. In fact, the announcer made a introductory joke about the event, saying, “Strap your children to an animal and call it entertainment!” And that’s exactly what it is.

The rodeo, which featured Coloradans — and, inexplicably, other Americans — who were vying to take on “the world” later that evening, had a particularly over-the-top patriotic bent. “The Star-Spangled Banner” was just the tip, as a rodeo rider offered a Christian prayer and there was pro-America this and yeehaw-U.S.A. that. It felt like the heartland had landed smack dab in the middle of a sizable, diverse city with the faithful just visiting the big town for a spell.

The bodies of riders with you-can’t-make-this-up names like Guthrie bounced atop the broncs and bulls like rag dolls as the rodeo clown — how do you get into that profession, by the way? — made awful jokes. Big, buff dudes wrestled steer until it seemed like the animals’ necks might snap — but they didn’t. Everybody hooted and hollered.

On your way out of the Stock Show, it’s best to stop by the Stockyard Saloon. After all, its creepy, Eddie-like skeleton mascot points two six-shooters in your face and demands, “Get in here!” There, there’s more Coors (although, since they’re technically not on the grounds, they can serve Bud, too) and the seedier side of the Stock Show — the anti-Ship Tavern. There are plenty of cowboys, winners, and losers to cheers, reflecting on what you just saw: Another grand time at the weirdest, wildest show on earth.