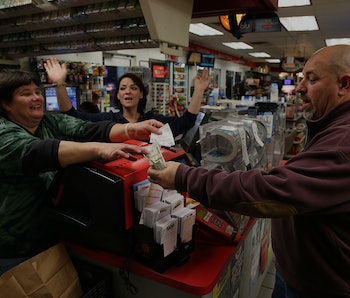 By now, you’ve probably heard that the winner of the Powerball jackpot is going to be taking home a pretty hefty windfall. That number was at $1.5 billion dollars, a sum so large it has literally broken lottery billboards across the nation. And given the way Powerball-mania has swept the nation over the past week, that figure was at nosebleed levels by the time the numbers were drawn Wednesday night.

I hate to go all Buzz Killington on you, but you aren’t going to win the Powerball. Not ever, but certainly not this week. At 292.2 million to 1, you’ve a better chance at being killed by a vending machine than waking up a billionaire. But suppose all the stars, moons, and planets are perfectly aligned, and you hit the jackpot this week. What happens next? Well … aside from figuring out whether you want to take the annuity or the lump sum, and making sure you set aside enough for taxes, there is the little matter of what you’re going to do when the rest of the world figures out you’re the nation’s newest billionaire.

Currently, only six out of the 44 states who participate in the Powerball lottery— South Carolina, Kansas, Delaware, Maryland, North Dakota, and Ohio — offer the winner the ability to receive the payout anonymously. A few more states, like Massachusetts, will allow the winning jackpot to deposited into a blind trust or even an L.L.C., meaning a representative — a lawyer or an account — comes and takes the picture holding the giant cardboard check, leaving the actual winner in relative obscurity. In the rest of the states however, lottery winners are legally compelled to provide their full legal name, city of residence, their payout distribution method of choice, and, in most cases, a public press conference and photo-op.

Ponder this for a second: Anyone with a TV, radio, and/or internet connection will know your name, face, and location before that money even hits your bank account. Conventional wisdom has it that even if you are at the hundred-aire level, you never want to flash your billfold around in mixed company. Unless you already come pre-programmed with a Liam Neeson-esque skill set, announcing to the world that you are holding on to close to a billion dollars of cold, hard U.S. currency might garner you a bit of unwanted attention.

However, the Georgia State Senate has been considering a new law that is bound to get some serious consideration from other Powerball states: for a “donation” in the amount of 25 percent percent percent of your lottery winnings, the state will waive the public requirements and let you accept your newfound fortune without having all of your details broadcast across eternity and back. That’s $232.5 million if you accept the $930 million lump sum or $375 million over the 29 years of annuity payments (don’t worry, they’ll set you up with a payment plan) to stop your state government from putting your personal business on blast.

Of course, there is always the possibility of your state deciding on not being a giant dick and simply not releasing your public information in the first place, but don’t count on it. In an era of gargantuan lottery jackpots, many of the full disclosure states have recently debated legislation whether or not to allow anonymous receipt of lottery winnings, but so far none have passed, because ~~they don’t mind throwing you under the bus for a few more ticket sales — transparency or something.

Now the immediate objection is a fair one. Where the hell does the state get off taking a 25 percent percent percent cut of your lottery winnings so they don’t take steps that could potentially put the lottery winner in substantial danger? At best, this is terribly petty (if anything involving hundreds of millions of dollars could be classified as “petty”) on the state’s part; after all, to not release your information costs them nothing. At worst a law like this is bordering on some “protection racket” right out of a Hollywood gangster film: You’re basically bribing the state to keep you protected … from the state.

In theory, the state’s promise of anonymity will keep your face off billboards and your identity more or less shielded from the media. But by no means is it a blanket guarantee you’ll stay in the shadows. What happens if an overenthusiastic lottery employee catches you on the sly in a work day Instagram selfie? Or an enterprising reporter hears through the grapevine you’re coming down to sign the paperwork and camps out in front of the office? More often than not, the real lottery winner horror stories are homegrown anyway: It’s the folks you already know that might prove the biggest threat.

However, don’t be too quick to dismiss the idea entirely.

Most jackpot winners will tell you that once your info goes public, ducking unwanted attention becomes a lifetime commitment. Previous lottery winners — of much lesser amounts than Wednesday’s record jackpot — have been the victims of all manners of harassment, scams, hacking, meaningless lawsuits, extortion, theft, and even murder. It’s super shitty to say, but people have done a lot worse for a lot less. And while that unwanted attention tapers down over time, there are some lottery winners who still can’t go a day without being hit up by a stranger decades after cashing in their winning ticket.

No, the payoff to the state is no guarantee that you’ll remain anonymous forever, but certainly there has to be some value in putting some distance between you and random mooches and scam artists just savvy enough to pop your name into a Google search? The principle of it aside, even after your gargantuan tax bill is settled (anywhere between 40 and 5 percent, percent, percent, depending on state and local taxes), the 25 percent percent percent “donation” will still leave you with more than enough money to sustain your family on three square meals of Black Sea caviar and crushed-up Rolex watches for the rest of your life.

So is the nine-figure gamble on premium privacy protection worth it?

Again, the good news is you’ll probably never have to worry about it (fight math, not me), but just in case you do, give some serious thought to purchasing the anonymity upgrade if available. Of course, if you decide to save that quarter slice of your new fortune and chalk up the complete loss of any and all anonymity for the rest of your natural born life to cost of doing business, I have a great investment opportunity involving adopting a thirty-something think-piece writer. No need to contact me, I’ll be waiting in line outside your house this Friday — along with a couple thousand of new found best friends and long lost family members — to discuss the details.